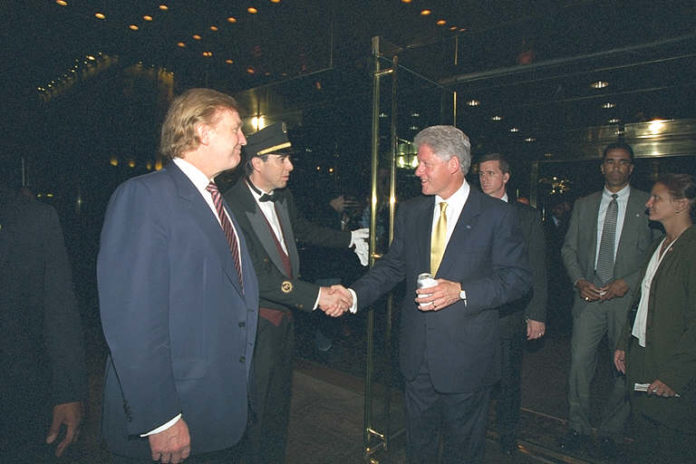 Epstein allegedly committed suicide in his jail cell early Saturday morning after weeks of being in the custody of the Southern District of New York.

His death comes just two weeks after he had been placed on suicide watch.

Naturally, conspiracy theories immediately propagated on Twitter, especially since Attorney General Bill Barr had removed Epstein from suicide watch. Epstein’s trial was scheduled for next year, during which he could have made damaging revelations against Trump and other powerful men, including Clinton.

But rather than act presidential and stay away from perpetuating a conspiracy theory, Trump retweeted a post accusing Clinton of having Epstein killed.

The problem is that Epstein died under Trump’s watch. His Department of Justice was responsible for his welfare in federal prison. Barr is the one who removed Epstein from suicide watch. If anything, the facts point to Trump. He had the power and the reach to prevent Epstein from talking, and now he won’t be.

Clinton, on the hand, has no such power or reach.

Twitter users expressed absolute disgust over Trump’s retweet, even suggesting that Trump may be inciting his supporters to kill his political opponents:

It is unfathomable to me that a President of the United States would retweet this. Literally unfathomable. It would be outrageous for even a member of a local city council, let alone from the person who is to Take Care that the Laws be Faithfully Executed. pic.twitter.com/wx7FCdnmp2

Let’s not mince words here: The President of the United States is a nut job. pic.twitter.com/6qe2vNeM8Z

Is Trump actively spreading conspiracy theories about Epstein hoping some of his supporters assassinate his political opponents and he can claim innocence just like he did with the recent white nationalist terror attacks?

THIS is NOT NORMAL pic.twitter.com/0tXUwmZZLA

BOP – which runs the facility in which Epstein was housed – is part of DOJ, which is overseen by Barr, who reports to Trump. https://t.co/bd4qZRFYkW. Just stop. https://t.co/szTH6QJS14

Bill Clinton:
– Not in charge of Bill Barr’s DOJ

There is no basis to believe the Clinton’s had anything to do with Epstein’s death. For Trump to suggest they’re somehow involved is irresponsible. He should be forced to immediately retract this but his own party is unwilling to hold him accountable for any of his failings. https://t.co/qnNYRkAl6F

Just when you thought Trump could not disgrace the office any worse than he already has.