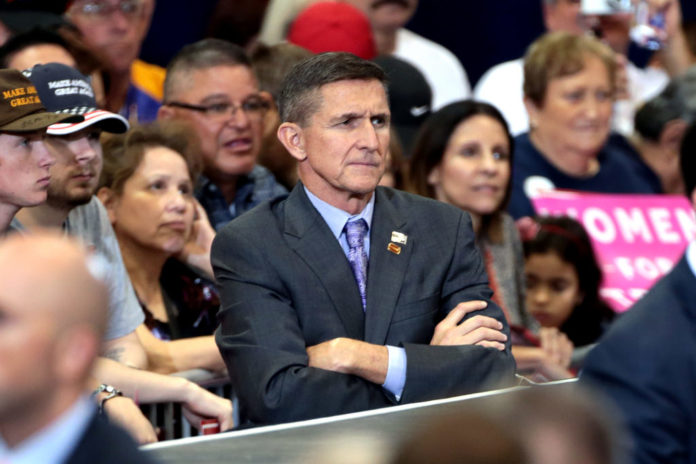 President Donald Trump accused the FBI of forcing disgraced former National Security Adviser Michael Flynn to lie in exchange for a plea deal in a panicky tweet that smacks of desperation.

As we all know, Flynn was busted for lying to the FBI about his contact with the Russians, forcing him to resign his White House role in 2017. He was also the one of the first Trump associates to make a plea deal with Special Counsel Robert Mueller, and because of his extensive cooperation he will likely serve little to no time in jail. And that’s bad news for Trump because Flynn must have given Mueller some seriously good testimony to get such a sentencing recommendation.

But in yet another desperate and nonsensical Twitter rant, Trump claimed that the FBI “overrode” themselves and that Flynn was forced to “make up stories” all while writing off Flynn’s lies as “the smallest of misstatements.”

They gave General Flynn a great deal because they were embarrassed by the way he was treated – the FBI said he didn’t lie and they overrode the FBI. They want to scare everybody into making up stories that are not true by catching them in the smallest of misstatements. Sad!……

Trump then tacked on a screaming tweet with his favorite claim about the Russia investigation.

What actually happened: McCabe testified the two agents who interviewed Flynn initially got the impression he was being honest. But then officials compared Flynn’s claims about his convo w/ the Russian ambassador to a *transcript* of the call and found Flynn had indeed lied. https://t.co/tI3S0bPBdb

Correct, and it’s not uncommon for this to happen. Sometimes interviewees are convincing, and their lie is not uncovered until it is compared with the evidence. https://t.co/xQzwJThur3

Nothing done in relation to Flynn comes anywhere close to any legal definition of “entrapment.” You may believe the law should be different, but our federal judiciary disagrees with you.

I don’t believe the FBI’s interview practices are evidence of “corruption.” https://t.co/8HEuCKA4D7

This is an interesting point. Stating that someone “appeared” to be truthful is different than being convinced that they were telling the truth.

Regardless of which it was, the initial impression of agents does not determine whether or not a statement was truthful. https://t.co/bRccJYEjSe

Other legal experts also weighed in.

It’s bad when even prosecutors start cringing over public statements a subject makes because they know he’s dooming himself. https://t.co/pje8vGkgFl

Sir, Flynn lying about contacts with Russia is not “the smallest of misstatements.” And neither are the other 90-plus contacts by the other 13 people in the campaign or transition that you and they concealed. If all of this is no big deal, why all the lies about it? https://t.co/WcQ2riLnDB

Indeed, lying to the FBI is a crime, one which Flynn got caught committing. Trump clearly does not know how the law works, and he certainly doesn’t understand what the FBI and Justice Department do.

The bottom line is that Flynn faced prison time for these crimes, and he decided to flip on Trump and help investigators rather than spend time in jail for his former boss. Trump should be very afraid of what Flynn told Mueller, and he’s showing that fear by lashing out on Twitter like a cornered criminal.