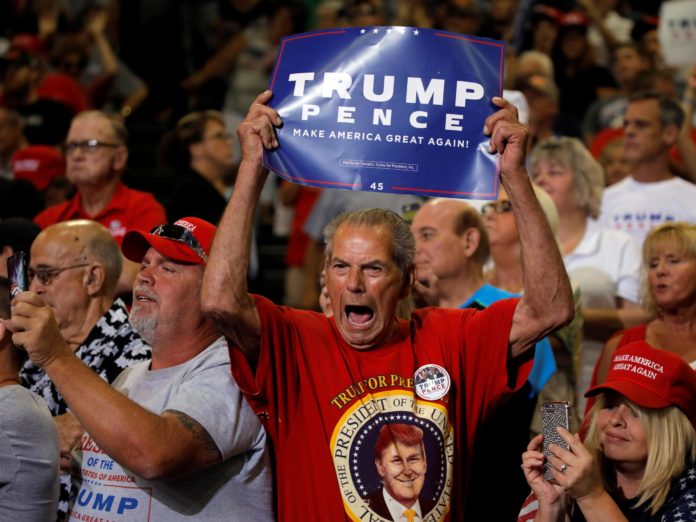 Just this week alone, suspicious packages — believed by law enforcement to be bombs — have been mailed to the homes of billionaire philanthropist George Soros, Bill and Hillary Clinton, Barack and Michelle Obama, and CNN.

Considering the targets, it seems safe to suggest that some right-wing extremist is potentially behind these attempted bombings, but to hear some of President Donald Trump’s most ardent supporters tell it, the whole thing is a plot by the left to distract from the caravan of Central American immigrants who are headed toward the U.S.-Mexico border.

On Reddit, a popular online gathering place for Trump acolytes, one person wrote:

“ALL BULLSH*T. SOROS, HILLARY AND OBAMA MAILED THEMSELVES PACKAGES TO 1) GET IN MEDIA 2) NOW MSM CAN TARGET TRUMP SUPPORTERS 3) GET SYMPATHY 4) MISDIRECT FROM CARAVAN TIES.”

Another avowed Trump disciple even said the bombs are meant to shift the balance of power as the midterm election approaches:

“They are doing it to themselves! If it turns out that they can’t find the people who did it, it’s because THEY did it. Same damn thing with Soros. Mid-term victimhood. Next VICTIM. Obama.”

There was also the ubiquitous mention of how the “deep state” was trying to control the narrative because the GOP is on the verge of winning the upcoming election:

“Now Hillary and Obama have received packages that could be ‘explosives. You guys, the deep state is going all out right now cause they know the midterms are going to be devastating.”

Perhaps it shouldn’t surprise any of us that in this age of Alex Jones, Sean Hannity, and Donald Trump — all of whom traffic in ludicrous conspiracy theories — that the very real threat of mail bombs is suddenly seen by some as a hoax aimed at harming a president and party that lie as often as they breathe. But that doesn’t make the much larger threat from such misinformation any less dangerous.