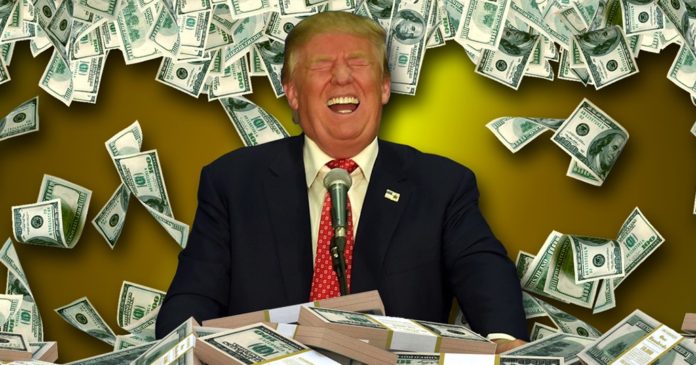 In yet another example of how the Trump administration applies two levels of justice –one for those who have money and another for those who don’t — ProPublica has uncovered a massive miscarriage of justice by the officials at Trump’s DOJ, which is greatly reducing the settlements made with two British banks:

In settlements last year with the two big U.K.-based banks, Barclays and Royal Bank of Scotland, political appointees at the Trump administration Justice Department took the unusual step of overruling staff prosecutors to reduce the settlements sought, leaving billions of dollars in potential recoveries on the table, according to four people familiar with the settlements.

In the case of RBS, then-Deputy Attorney General Rod Rosenstein decided that the charges should not be pursued as a criminal case, as the prosecutorial team advocated, but rather as a less serious civil one.

The cases were developed by DOJ prosecutors during the Obama administration, and involve accusations that the banks lied to buyers of mortgage-backed securities shortly before the 2008 financial crisis. The evidence against them was overwhelming:

Prosecutors seemingly found numerous examples of bankers knowingly selling lemons to their customers. The mortgages they were putting into securities were “total fucking garbage,” one RBS executive said in a phone call that was recorded and cited in a DOJ filing. A Barclays banker said a group of loans “scares the shit out of me.” Mortgages that went into the two banks’ securities lost a total of $73 billion, according to calculations used by the government.

The Obama Justice Department settled with Barclays in March of 2018 for a total of $2 billion. RBS settled for $4.9 in August of 2018, months before the election.

Take a look at the settlements negotiated by the Obama administration and those Trump’s DOJ has imposed:

How did the two banks manage to get their settlements reduced? They hired former DOJ employees to represent them before the Trump Justice Department:

The British banks employed an old playbook, one that proved effective with the Trump administration: Hire prominent former high-level DOJ officials who were now at major law firms. These attorneys won access to the top echelons of the Trump DOJ, where they found an audience receptive to their arguments that the staff prosecutors were unfairly singling out their clients for excess punishment.

The Trump officials, it should be noted, were woefully unprepared for what they faced when attorneys for the banks showed up to argue for a lower settlement:

Neither had much experience with federal prosecutions. Panuccio was a former lawyer to Florida Gov. Rick Scott, as well as the chief labor and land use official in Florida, and Cox was a onetime associate at WilmerHale who had spent six years as a corporate counsel at an oil company, Apache Corporation, before joining the DOJ.

Remember how Donald Trump promised to “drain the swamp” when he ran in 2016? Turns out he really meant he’d let big banks and corporations run the show in his administration at the expense of the American people.