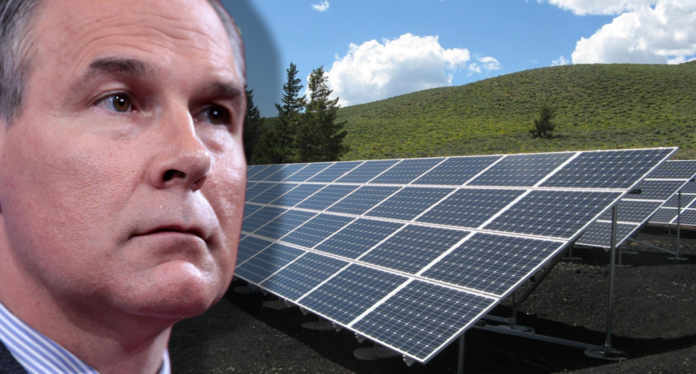 While Trump and his environmentally irresponsible administration try to sell us more “trickle-down economics” and a myth of “clean coal,” the renewable energies markets have reached a tipping point. Trump and the fossil fuel industry will likely want to bury this news from seeing the light of day, but it’s coming out anyway…

In one of the fastest and most astonishing turnarounds in the history of energy, building and running new renewable energy is now cheaper than just running existing coal and nuclear plants in many areas.

A yearly benchmarking study by a financial firm, Lazard Ltd. has made it clear that the tipping point for clean energy has been reached. Lazard has advised governments, financial institutions, and individuals around the world since 1848.

Scott Pruitt, Trump’s Environmental Protection Agency Administrator, has said he would do away with federal tax credits for the wind and solar power industries, but even without subsidies, these technologies are winning anyway.

Lazard's Levelized Cost of Electricity report finds US #wind and #solar now cheaper than natural gas, even without subsidies.#renewables https://t.co/sRTs4CJG5z

A quick summary of the Lazard study: The costs to build and run new solar and wind plants are lower than new gas plants. Nuclear power has become so expensive it is quickly becoming obsolete. Gas remains competitive here in America, where the costs for operating conventional energy sources are lower than in developing countries. The price for lithium-ion batteries to store energy from renewable sources is also dropping, so what advantage gas has will likely reach a tipping point shortly as well.

Companies like the progressive Tesla corporation are giving a clear indication of the benefits of renewable energy with new battery technology today in Puerto Rico, where they just restored power at children’s hospital. The system provides all of the energy to meet the hospital’s needs, according to a report from NPR.

Hospital del Niño is first of many solar+storage projects going live. Grateful to support the recovery of Puerto Rico with @ricardorossello pic.twitter.com/JfAu11UBYg

Then, consider the video below. Tesla’s new battery-powered car is the fastest, and maybe the sexiest car on the planet.

Tesla just made the fastest street car on the planet — and it runs on battery power pic.twitter.com/fBeeZnx80t

There is no more denying the fact that the world’s energy markets will be shifting to cleaner renewable energy in the near future, or at least when Trump is no longer in office.

If America doesn’t move to renewable energy for the environmental reasons, then it will make the switch because it’s cheaper and more efficient. It’s a no-brainer that even Trump will one day have to acknowledge or be swept into the tar sands of history.