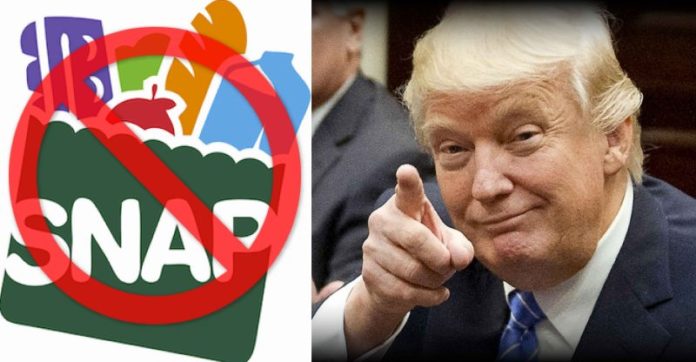 The Trump administration is preparing to drastically alter the way the national poverty threshold, which could mean that millions of Americans will be denied access to social welfare programs such as Medicaid and food stamps, according to Bloomberg:

“The possible move would involve changing how inflation is calculated in the ‘official poverty measure,’ the White House Office of Management and Budget said in a regulatory filing on Monday. The formula has been used for decades to determine whether people qualify for certain federal programs and benefits.

“The measure, first set in the 1960s, is calculated at three times the cost of a minimum food diet and adjusted every year as prices rise. In 2018, a family of four making no more than $25,900 was considered impoverished. The figure determines eligibility for a wide swath of federal, state, and non-profit programs, including Medicaid and food stamps.”

According to a notice from the Office of Management and Budget (OMB) published in the federal register, the shift would be made to what’s known as chained Consumer Price Index (CPI):

That, according to the OMB, would dramatically change who is eligible for such programs:

“Because of this, changes to the poverty thresholds, including how they are updated for inflation over time, may affect eligibility for programs that use the poverty guidelines.”

Melissa Boteach, who oversees income security programs at the National Women’s Law Center (NWLC), said that while the change may seem nothing more than a technicality, but is actually a direct attack on millions of working Americans:

Seems technical, but it’s actually a big attack on working people. In short, Trump wants to weaken how our poverty definition keeps pace with cost of living. So each year, as costs go up, many working people w/low pay would gradually be stripped of WIC, Medicaid & other basics 3/

This is just the latest move by the administration to make it increasingly difficult for needy Americans to gain access to welfare programs which help millions of Americans. In 2018, President Donald Trump signed an executive order calling for stricter work requirements for those receiving assistance. At the time, Trump commented:

“Millions of able-bodied, working-age adults continue to collect food stamps without working or even looking for work. Our goal is to move these Americans from dependence to independence, and into a good-paying job and rewarding career.”