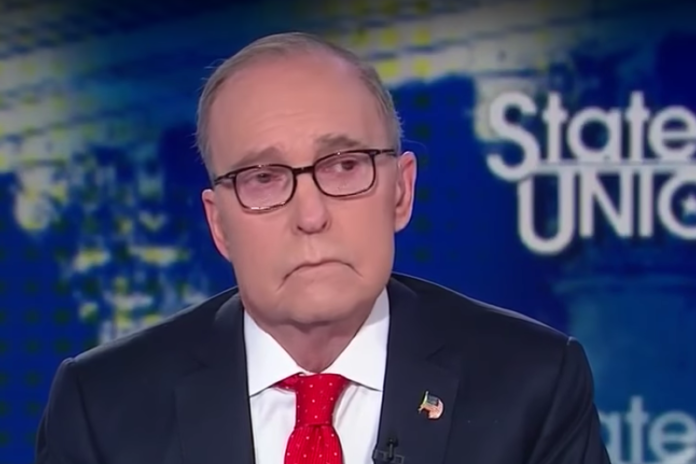 CNN’s Jake Tapper grilled President Donald Trump’s economic adviser Larry Kudlow on Sunday morning about the “tit-for-tat” tariffs between the United States and China and how they hurt American farmers. But Kudlow only really cared about how Wall Street fat cats are profiting.

Earlier this week, Trump slapped a $50 billion tariff on imported goods from China, which drew an immediate retaliatory tariff from China on American agricultural products such as soybeans, and equipment used to manufacture products here at home.

As a result, American farmers are losing billions and manufacturers will have to raise prices, which will force Americans to spend more money.

Despite this, Trump reacted to the retaliatory tariff by threatening China with a $100 billion tariff, which didn’t faze the Chinese government at all. China will simply match the tariffs and find somewhere else to buy their soybeans.

As the second largest customer for American soybeans, that means a major loss of business for farmers, many of whom voted for Trump in 2016.

Tapper pointed out that Trump is ignorant about how trade deficits work because not only is he wrong about the amount, which is $375 billion instead of $500 billion, Americans get goods and services in return for that deficit. Americans simply spend more for Chinese goods than China spends for American goods.

But Kudlow ignored the facts and supported Trump’s actions. He said:

“I think personally we have had to go in and fire a shot across the bow. China’s behavior for 20 years now is more than unfair trade practices, it’s illegal trading practices. They are stealing our property rights. They are forcing technology from our companies to be open so they can get it, and they have tall trade barriers that the president is somewhat right about and this stuff has to stop.”

Of course, the United States can negotiate with China to change these practices without resorting to using tariffs and hurting farmers in the process. But Kudlow was quick to declare that Trump isn’t to blame for the trade war despite the fact he’s the one who started it by issuing tariffs in the first place.

“I say to everybody on this the problem here is China, it’s not President Trump,” he said. “China has been getting away with this for decades. I think it is going to generate very positive results which will grow our American economy.”

Tapper challenged Kudlow by noting that the stock market has been sliding since Trump started obsessing with tariffs. Tapper also pointed out that Kudlow himself called tariffs “prosperity killers” and “tax hikes” that were a cause of the Great Depression.

Predictably, Kudlow backed away from his own words now that he works for Trump.

But Tapper continued challenging him, and fired back that:

“You talk about the good things that Trump has done for the economy. The Dow is down 10 percent under the threat of the trade war and threat of retaliation causing problems for farmers especially. Soybean prices down four percent costing $1.7 billion in crop value. What do you say to those farmers who say ultimately ‘I don’t like this negotiation, it’s hurting my bottom line?’”

Indeed, the Dow Jones dropped 500 points alone on Friday. And the more this back and forth continues, we can expect to see it drop even further.

But rather than sympathize with farmers, who, again, are Trump supporters, Kudlow chose to tout Wall Street profits. He bragged that:

“We are growing at 3.1 percent and annual business investment is booming right now. The stock market is still up 25 percent plus since the election. You talk to a Wall Street guy, profits are the mother’s milk. Profits are coming in like gangbusters. I’m not going to predict the stock market, I don’t think they will want me to, but I have thoughts on the matter. We will do fine with the earnings.”

Sure, Wall Street may do fine, but rural Trump voters who believed he would fight for them are going to feel duped now. Farmers are about to get smacked with heavy losses. China won’t be affected since they’ll simply get their soybeans elsewhere such as from Brazil. China has substitutes to turn to for what they lose from the United States. Americans don’t have nearly as many.

But as farmers suffer, so will Trump’s political fortunes and those of his Republican allies. All Kudlow did on Sunday is confirm that Trump doesn’t care about the people who voted for him. Well, he’ll definitely care when they go to the ballot box in November, but it will be too little, too late by then.