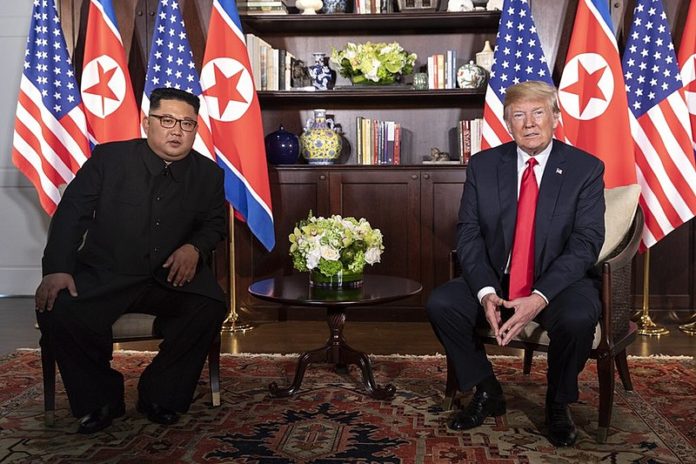 President Donald Trump hasn’t even left for Vietnam yet to meet with North Korean dictator Kim Jong Un and he is already spiking the football and claiming the second summit a success.

Despite his bone spurs tingling, Trump is going to Vietnam for talks with Kim Jong Un about nuclear arms in a negotiation that will likely be disastrous for the United States and our Asian allies.

After all, North Korea has been duping Trump ever since the last summit with Kim Jong Un in Singapore last year by developing missile sites and stockpiling more nuclear weapons, all while making extreme demands as a prerequisite to denuclearization.

And now we know that Trump is going to call this upcoming summit a success no matter the outcome, elevating fears that this is nothing but a propaganda show designed to fool the world into thinking Trump has achieved something while North Korea pretends to cooperate and gets to remain a threat to the world.

On Sunday morning, Trump bragged about the meeting before it has even started.

Very productive talks yesterday with China on Trade. Will continue today! I will be leaving for Hanoi, Vietnam, early tomorrow for a Summit with Kim Jong Un of North Korea, where we both expect a continuation of the progress made at first Summit in Singapore. Denuclearization?

President Xi of China has been very helpful in his support of my meeting with Kim Jong Un. The last thing China wants are large scale nuclear weapons right next door. Sanctions placed on the border by China and Russia have been very helpful. Great relationship with Chairman Kim!

Chairman Kim realizes, perhaps better than anyone else, that without nuclear weapons, his country could fast become one of the great economic powers anywhere in the World. Because of its location and people (and him), it has more potential for rapid growth than any other nation!

Seriously, this summit is apparently going to be an event where both leaders take turns flattering each other and nothing actually changes.

North Korea has already been caught lying about missile facilities. Furthermore, North Korea has demanded the withdrawal of all American military forces from Southeast Asia as a precondition for denuclearization. Even Trump’s own intelligence chiefs agree that North Korea has no intention of surrendering their nukes.

And Trump’s desperation for a Nobel Peace Prize and his willingness to give dictators what they want has raised fears that Trump will meet with Kim Jong Un alone and give up major concessions and even share sensitive intelligence.

Again, this summit is nothing but a propaganda show designed to fool people into believing Trump is actually achieving something when what’s really happening is he is being duped. And he actually thinks he deserves a Nobel prize for it. America’s national security is on the line as is the security of our allies, but Trump is clearly only thinking of himself and his ego. This is not going to end well.