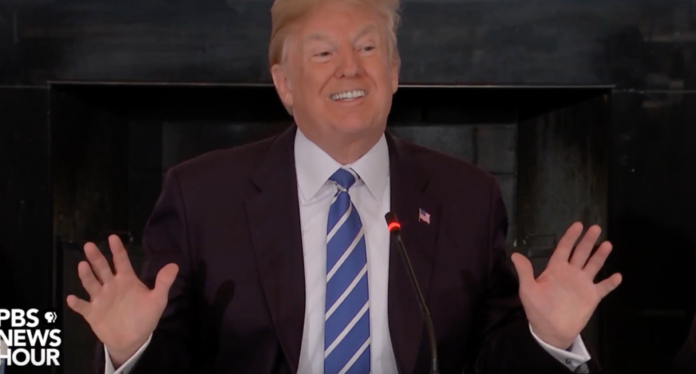 During a meeting of governors and mayors, President Donald Trump gloated about modernizing and creating new nuclear weapons. Trump suggested that the United States had no choice but to advance a nuclear arms race, but if other countries took the lead and stopped first, then he would also.

“We’re increasing arsenals of virtually every weapon. We’re modernizing and creating a brand-new nuclear force. And, frankly, we have to do because others are doing it. If they stop, we’ll stop. But they’re not stopping, so if they’re not going to stop, we’re going to be so far ahead of everyone else in nuclear, like you’ve never seen before.”

Trump indicates that the U.S. will stop leading by example, as has been the approach advanced during previous administrations.

Trump didn’t specify which countries he was talking about. He has sparred with North Korea over ballistic missile launches recently and pulled out of a 30-year-old Cold War arms control agreement signed by Ronald Reagan.

The decision to pursue medium-range nuclear missiles broke from the Intermediate-Range Nuclear Forces Treaty and was a response to Moscow’s potential violation with its own deployment of a mid-range nuclear weapon.

Earlier this month, the Pentagon released a new nuclear arms policy, calling for developing two types of nuclear weapons, after pointing to a Russian “Doomsday weapon” which originated from a Russian propaganda video and may have been a fake.

Now, on the one hand, Trump suggested he would like to reduce weapons production, while on the other, he bragged about America’s nuclear force, while releasing a federal budget for fiscal 2019 that includes $80 billion more funding for the military, and a total increase of $165 billion in Pentagon spending over two years. The Trump administration is asking for $716 billion for the Defense Department, a 13-percent increase over 2017 levels, according to a Washington Times report.

If it depends on even sketchy reports of what other countries are doing, then we can count on an ever-more bloated United States military under Trump.

“We will have a nuclear force that will be absolutely modernized and brand-new. And hopefully we will never have to use it, and hopefully we could reduce it in the years ahead. And that depends really on what other people are going to be doing.”