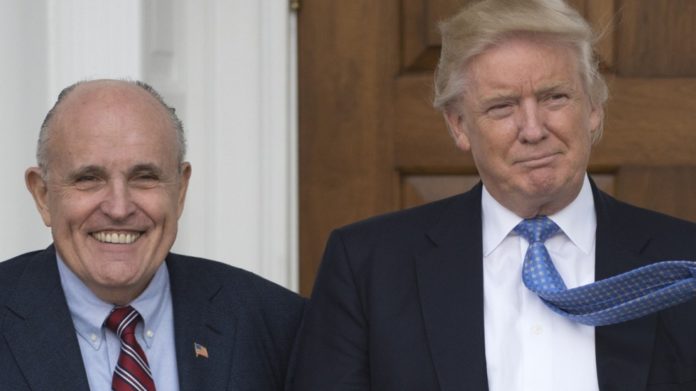 It appears that the legal strategy for President Donald Trump has now devolved into him and his so-called attorney, Rudy Giuliani, tweeting out lies about the FBI for daring to investigate Trump for allegedly conspiring with Russia.

Over a short span of time Saturday, both Trump and Giuliani attacked former FBI agents Peter Strzok and Lisa Page. Trump posted this:

Wow, 19,000 Texts between Lisa Page and her lover, Peter S of the FBI, in charge of the Russia Hoax, were just reported as being wiped clean and gone. Such a big story that will never be covered by the Fake News. Witch Hunt!

How can Mueller’s gang get away with erasing over 19,000 texts of Trump haters Stroyk and Page? They say it was DOJ policy to destroy evidence? I guess Mueller’s angry Democrats fall under the Hillary exception to obstruction of justice. She erased over 30,000 emails.

Here’s the problem with the tweets: The inspector general for the Department of Justice found zero evidence that any FBI agents or other members of federal law enforcement deliberately destroyed any text messages, all of which were recovered by the Bureau.

Strzok, you may recall, sent anti-Trump texts to Page while they were both working at the FBI. He was eventually fired and Page resigned merely because they dared to express their opinions of then-candidate Donald Trump. As it turns out, many of their fears about Trump being compromised by Russia have turned out to be substantiated through the indictments and other court documents filed by Special Counsel Robert Mueller’s office.

It seems obvious that the intent of both Trump and Giuliani is to question the integrity of the very agencies investigating the president for his contacts with Russia, as other Twitter users reminded both men:

Bullshit. Those texts were recovered and OIG determined the gaps in collection were NOT intentional on the part of FBI or FBI personnel. Attaching the OIC conclusion for those of your supporters who don’t have the attention span of a gnat, like you. pic.twitter.com/8eVcn6Ns4J

The OIG recovered those text messages. That was reason for the report they just released. Assistant AG Stephen Boyd, a #DonaldTrump appointee, attributed it to “misconfiguration issues related to rollouts, provisioning, and software upgrades.” #TrumpLiesMatter 😳

Well duh because it didn’t happen and two the DOJ OIG Report
Why are you willing to toss your entire legacy aside in furtherance of Trump’s corruption?
It’s sad you use to be respected and then you decided to throw it all away.https://t.co/PqdUjKSd2T