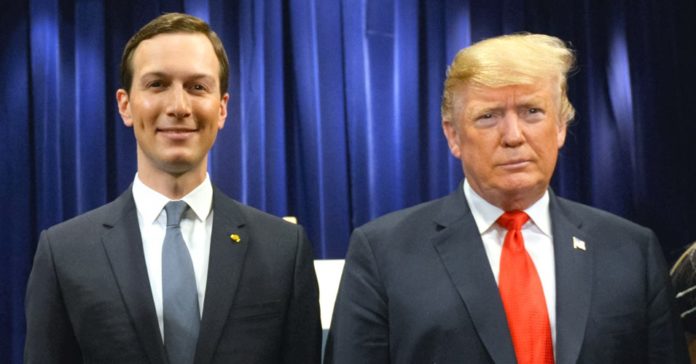 When he signed the First Step Act in December of 2018, President Donald Trump gave himself and his son-in-law, Jared Kushner, lots of credit for getting a criminal justice reform bill passed, commenting:

“So, many people said — in fact, I guess we could say almost all people said — that criminal justice reform would never pass.  But we came together as a group, we worked across party lines, and we got it done.”

Now, however, less than a year later, Trump is said to be upset that he let Kushner talk him into the legislation, according to Politico:

“Kushner reiterated the positive selling points of that bill during the Oval Office meeting as Trump campaign officials and White House aides ticked through the president’s achievements, wondering which would resonate most with his adoring base. But Trump wasn’t interested and told Kushner he didn’t think his core voters would care much about a bipartisan deal for which he’s since accused Democrats of trying to steal credit.

“It was clear he thinks it’s a total dud,” said a person familiar with the meeting. “He made it abundantly clear he doesn’t think it’s worth talking about.”

The main reason for Trump’s reversal on the reform bill: He doesn’t think it’s going to help him politically in 2020 and even fears it may hurt him:

Trump “is telling people he’s mad” at how criminal justice reform has panned out, according to a person close to the president. “He’s really mad that he did it. He’s saying that he’s furious at Jared because Jared is telling him he’s going to get all these votes of all these felons.”

The larger worry is that if one of the prisoners who received early release commits another crime, it could come back to bite the president in a big way. Not exactly what a “law and order” Republican like Trump wants as he gears up for reelection:

“You let people out of jail early, commute sentences, something bad happens because of this effort [and] it’s going to be one more egg on their face – or even worse, blood on their hands,” said a former Senate Republican staffer.

The bottom line on the First Step Act, administration insiders note, is that Trump doesn’t think the legislation has helped him in the least, and he blames Kushner for it:

“Jared has got all these stats like ‘every rapist in Florida is now going to vote Republican,’” quipped the person close to Trump.

“Trump doesn’t believe it and he’s mad Jared sold him this thing,” the same person said.

Of course, if Trump thinks he’s getting bad advice from Kushner, he could always fire him, but then he runs the risk of upsetting his daughter, Ivanka, who’s married to Jared. It’s yet another example of why hiring your relatives is a bad idea no matter what business you happen to be in.