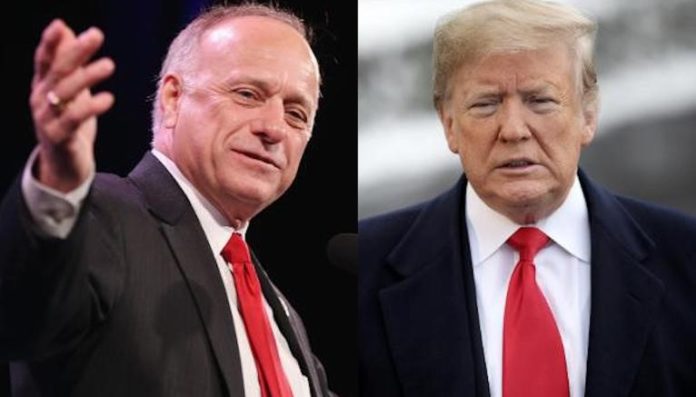 Rep. Steve King (R-IA) isn’t just in hot water with voters back in his home state, he’s also got President Donald Trump furious with him for potentially ruining Trump’s reelection chances, and that could be the kiss of death for King, according to CNN contributor April Ryan.

Appearing on CNN Sunday morning, Ryan noted that King’s inflammatory remarks about rape and incest this week may mean the national Republican Party winds up pushing him out of office:

“The way I understand it, evangelicals are very upset with Steve King for the latest rant. Republicans are upset and they want him gone, you know he’s being primaried.”

Ryan then focused on the ire coming from the White House that is clearly directed at King:

“You also have a president that feels he’s a distraction no matter what he says. This president is having a problem in Iowa, another state he is having a problem in, and Steve King is not helping. Republicans are doing a lot of things, talking behind closed doors and Steve King is in trouble. All of this stuff is coming up, it’s catching up with him.”

“Yeah, certain Republicans on Capitol Hill are now talking about supporting his primary opponent. The president’s full extent of what he said was, ‘certainly wasn’t a good statement.'”

Steve King has been a loose cannon for years now, and he’s getting more outrageous and offensive with every time he opens his mouth. Keep in mind this is the very same Steve King who said in January:

“White nationalist, white supremacist, Western civilization — how did that language become offensive? Why did I sit in classes teaching me about the merits of our history and our civilization?”

If indeed the president is fed up with King and his disgusting comments, that could well be the end of King’s congressional career. And while that would certainly be a blessing, we need to send Trump into early retirement next year, too.