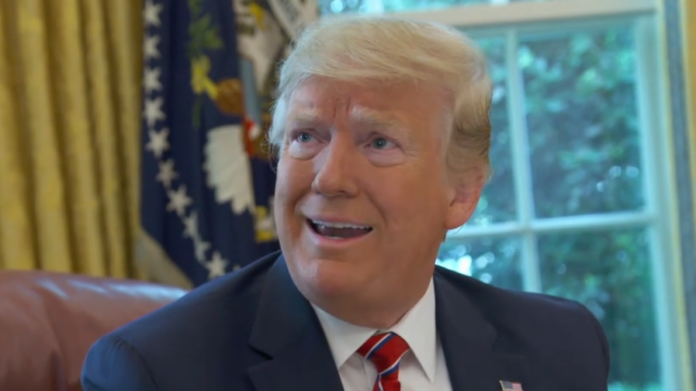 Just in case any hostile foreign governments were wondering if President Donald Trump is eager to use information from their country on an opponent in the 2020 election so he can cheat his way back to the Oval Office, he made it clear Wednesday that he welcomes such assistance.

In an exclusive interview with George Stephanopoulos of ABC News, Trump was asked if he wants dirt from foreigners to help him win re-election. He responded:

“I think you might want to listen, there isn’t anything wrong with listening. If somebody called from a country, Norway, [and said] ‘we have information on your opponent’ — oh, I think I’d want to hear it.”

Wouldn’t that be interference in an election, the very same thing Trump was accused of doing in 2016 when he lost the popular vote by nearly 3 million votes but won the electoral vote? The president replied:

“It’s not an interference, they have information — I think I’d take it. If I thought there was something wrong, I’d go maybe to the FBI — if I thought there was something wrong. But when somebody comes up with oppo research, right, they come up with oppo research, ‘oh let’s call the FBI.’ The FBI doesn’t have enough agents to take care of it. When you go and talk, honestly, to congressman, they all do it, they always have, and that’s the way it is. It’s called oppo research.”

EXCLUSIVE: Pres. Trump tells @GStephanopoulos he wouldn’t necessarily alert the FBI if approached by foreign figures with information on his 2020 opponent: “It’s not an interference. They have information. I think I’d take it.” https://t.co/7gvoAViw9r pic.twitter.com/k5Yqd9YxdC

Stephanopoulos noted that FBI Director Chris Wray (who was appointed by Trump) has said he expects anyone who gets such an overture to notify the agency. But the president would hear none of it, scoffing at the notion:

“The FBI director is wrong, because frankly it doesn’t happen like that in life. Now maybe it will start happening, maybe today you’d think differently.”

Just yesterday, a Quinnipiac University poll was released showing that Trump would lose to the top six Democratic candidates. As CNN notes:

The poll shows 53% of voters said they would support Biden and 40% said Trump. Biden and Trump held side-by-side events in Iowa on Tuesday, both using their platforms to insult the other one. Biden called Trump an “existential threat” to the country and Trump said Biden was a “dummy.”

The gap is smaller but still a distinct advantage for Sens. Bernie Sanders (up 9 percentage points), Kamala Harris (+8) and Elizabeth Warren (+7). Others candidates, such as Sen. Cory Booker and Mayor Pete Buttigieg, scrape by the margin of error, leading Trump by 5 percentage points each.

Trump knows he can’t win a honest race in 2020, so he’s going to try and steal another election. He just said so.