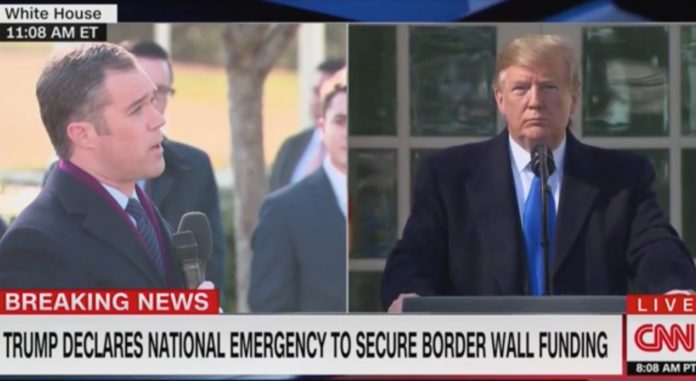 With his rambling performance in the Rose Garden Friday morning, President Donald Trump may have destroyed any chance he had of winning a court case on his national emergency declaration to build a wall on the U.S.-Mexico border.

“Meet the Press” host Chuck Todd noted shortly after Trump had announced the emergency declaration and sparred with the press that the president had serious undercut his claims that there’s really an “emergency” on the border:

“I think he made his case a lot harder with the performance in the Rose Garden.

Indeed, Trump flat-out confessed that he was declaring the national emergency so he could build a wall “faster,” and then said he was also doing it in order to bolster his chances for re-election:

“The only reason we’re up here talking about this is because of the (2020) election.”

And that one line, according to former federal prosecutor Glenn Kirschner, is going to come back to bite Trump as soon as the emergency declaration is taken to court:

“The president just fatally undercut his own position. Because he is the worst deal maker perhaps to ever occupy the Oval Office, he couldn’t strike a deal with Congress to get funding for his beloved wall, so what we just saw was an executive order tantrum.

“The courts are not gullible and the judges are not stupid. They will see this for what it is. And the president himself just said, ‘I didn’t need to do this, but I want to do it faster’… the president doesn’t have a case to make.”

The president would have been better off signing the declaration in the Oval Office with no media around. Then he could have released a statement written by Justice Department attorneys explaining his rationale for what he had just done. Instead, he ran off at the mouth and all but doomed any chance that a federal judge will ever see things his way.

In other words, Donald Trump proved yet again what we’ve long known about him: He’s his own worst enemy.