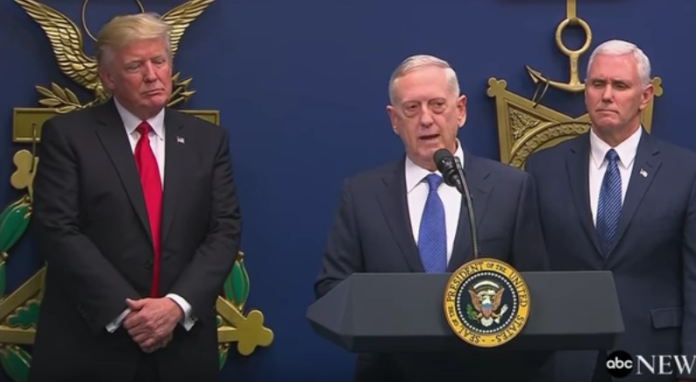 The United States may very well been at war with Iran right now if it wasn’t for Secretary of Defense James Mattis, who resisted President Donald Trump’s wishes.

Trump is obsessed with ripping up the Iran nuclear deal struck under the Obama Administration in 2015 after months of diplomatic negotiations.

Tearing up the deal was a central talking point during Trump’s campaign in 2016 and he has repeatedly accused Iran of violating the deal despite the United Nations saying in August that Iran has been compliant.

When Trump was just four months into his presidency, he wanted to launch military strikes against Iran; a move that would have automatically broken the deal and thrown our country into yet another war.

According to the Washington Post, Trump demanded that the Pentagon give him military options to use against Iran, but Mattis resisted.

For weeks, Mattis had been resisting requests from the White House to provide military options for Iran. Now Trump made clear that he wanted the Pentagon to deliver a range of plans that included striking Iranian ballistic missile factories or hitting Iranian speedboats that routinely harassed U.S. Navy vessels.

‘Why can’t we sink them?’ Trump would sometimes ask about the boats.”

We could sink the boats, but that would make the United States the aggressor since the Iranian boats do no more than attempt to intimidate our naval vessels. If we were to fire first without just cause, Iran could accuse us of starting a war.

And if the United States has to wage war with Iran, it will be bloodier and more costly than the current wars we are already fighting.

A war with Iran would destabilize the region more than it already is and would require ground troops on a level that our country just cannot spare right now, especially since Trump is also escalating tensions with North Korea, something else the Pentagon has been resisting in recent months.

Thankfully, Mattis made it clear that attacking Iran is not a priority. The Washington Post went on to report that Mattis never gave Trump the options he wanted.

“National security adviser H.R. McMaster and his staff laid out the president’s request for Mattis in a conference call, but the defense secretary refused, according to several U.S. officials, who spoke on the condition of anonymity to discuss sensitive internal deliberations. At that point, McMaster took Mattis off speakerphone, cleared his staff from the room and continued the conversation.

‘It was clear that the call was not going well,’ one official said. In the weeks that followed, the options never arrived.”

Again, a war with Iran would be far worse than the wars in Afghanistan and Iraq that America has fought in recent years. So, it’s a relief to know that at least someone in the Trump administration has a cool and reasonable head.

But Mattis can resist all he wants, the real question is what will he do if Trump actually orders the military to attack Iran without a good reason? Will he resist? Resign? Or will he let Trump drag America into a war?