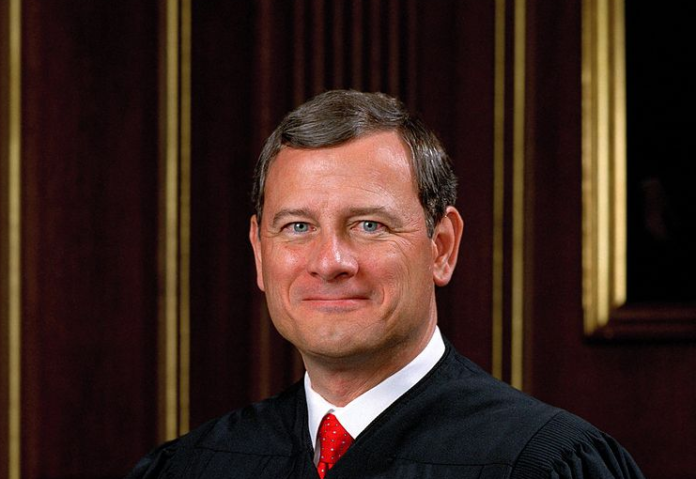 President Donald Trump lashed out at Chief Justice John Roberts on Wednesday and again on Thursday morning for speaking up in defense of judicial independence in response to Trump’s whining about an immigration ruling by the Ninth Circuit Court of Appeals.

The Ninth Circuit often makes rulings Trump doesn’t like, so when U.S. District Judge Jon Tigar blocked his executive order banning asylum for immigrants walking to the border as part of a so-called “caravan,” he threw a temper tantrum.

“Whatever the scope of the President’s authority, he may not rewrite the immigration laws to impose a condition that Congress has expressly forbidden,” Tigar wrote in his decision.

Trump responded by complaining about “Obama judges,” a remark that did not sit well with Roberts, the Chief Justice of the Supreme Court.

In a rare rebuke, Roberts defended our independent judiciary:

“We do not have Obama judges or Trump judges, Bush judges or Clinton judges,” Roberts said. “What we have is an extraordinary group of dedicated judges doing their level best to do equal right to those appearing before them. That independent judiciary is something we should all be thankful for.”

Indeed, it is the duty of every judge to interpret the law and make rulings based on those interpretations. They do not work for the president, nor do they have to agree with the president.

Sorry Chief Justice John Roberts, but you do indeed have “Obama judges,” and they have a much different point of view than the people who are charged with the safety of our country. It would be great if the 9th Circuit was indeed an “independent judiciary,” but if it is why……

…..are so many opposing view (on Border and Safety) cases filed there, and why are a vast number of those cases overturned. Please study the numbers, they are shocking. We need protection and security – these rulings are making our country unsafe! Very dangerous and unwise!

It should be pointed out that cases are filed there because immigrants cross the border in southern California, which is in the jurisdiction of the Ninth Circuit. It should also be noted that every court in the land is qualified to look at the constitutionality of laws, even those dealing with immigration and security.

Trump himself is less qualified to speak about immigration and security than most judges. You know, who have actually read the Constitution and study the law while Trump has spent most of his time avoiding books like the plague and watching propaganda on Fox News.

The fact of the matter is that immigrants who want asylum are able to apply for it at a port of entry. Any judge worth their salt will agree that Trump’s asylum ban violates a law Congress made. The executive branch cannot circumvent the law and any court that says otherwise is a conservative-leaning court that does not care what the Constitution says. Courts should not be beholden to the beliefs of the sitting president. That’s why it is a separate independent branch of our government that acts as a check and balance on the executive and legislative branches.

Trump continued his tantrum by claiming the caravan is full of “criminals” even though most of them are just women and children fleeing violence and political instability in their homeland. He also mused about splitting up the Ninth Circuit in order to put an end to rulings he doesn’t like.

There are a lot of CRIMINALS in the Caravan. We will stop them. Catch and Detain! Judicial Activism, by people who know nothing about security and the safety of our citizens, is putting our country in great danger. Not good!

“79% of these decisions have been overturned in the 9th Circuit.” @FoxNews A terrible, costly and dangerous disgrace. It has become a dumping ground for certain lawyers looking for easy wins and delays. Much talk over dividing up the 9th Circuit into 2 or 3 Circuits. Too big!

Trump is only calling to break up the Ninth Circuit because he doesn’t like their rulings. That’s not a good reason to break the court up. It’s the kind of meddling with the judiciary that Americans oppose. It amounts to rigging the court system and no president should be able to do that.

Trump continued whining about Roberts the next morning.

Justice Roberts can say what he wants, but the 9th Circuit is a complete & total disaster. It is out of control, has a horrible reputation, is overturned more than any Circuit in the Country, 79%, & is used to get an almost guaranteed result. Judges must not Legislate Security…

….and Safety at the Border, or anywhere else. They know nothing about it and are making our Country unsafe. Our great Law Enforcement professionals MUST BE ALLOWED TO DO THEIR JOB! If not there will be only bedlam, chaos, injury and death. We want the Constitution as written!

Legal scholar Jonathan Turley has debunked Trump’s claim that the Ninth Circuit is the “most overturned.”

Some circuits have a 100 percent reversal rate in some years because they had only one or two cases accepted for review. And even when the Ninth Circuit is the “most reversed” in a given year, it is not by much. There is a higher likelihood of reversal when a case is accepted by the Court – it is accepted for a reason and, for any circuit, it is not good news to end up on the docket. Thus, even in years when the Ninth Circuit is the most reversed, it is a close question of a few percentage points.

Plus, the Constitution expressly gives Congress the power to make laws. It does not give the president the power to overturn a law he doesn’t like with an executive order, which is what Trump is trying to do with his asylum ban. If he wants to ban asylum for immigrants, he has to wait for Congress to pass a new law. Furthermore, Trump is trying to use security and safety as an excuse to grab more power, which is something dictators have been doing for centuries.

Attacking Roberts is also not a good idea since he could easily turn on Trump by siding with the liberal Justices on the Supreme Court in future rulings, which would mean rulings by the Ninth Circuit may have found a new ally in the highest court in the land. And let’s not forget that Roberts would preside over an impeachment trial in the Senate should the House draw up articles of impeachment. Trump probably should have thought of that before opening his big mouth.