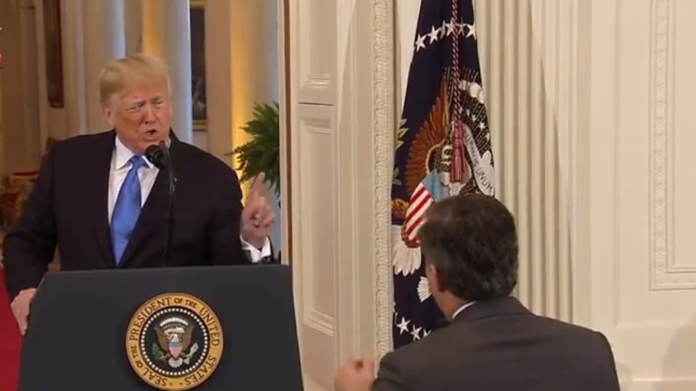 At a post-midterm election press conference he held at the White House Wednesday, President Donald Trump tried to put a happy face on the fact that his party lost control of the House of Representatives, but it soon became clear that he wasn’t prepared for some of the questions he got, particularly from CNN reporter Jim Acosta.

Acosta asked Trump about the migrant caravan from Central America the president has repeatedly said was an “invasion” of the United States even though it remains hundreds of miles away. Acosta asked the president:

“It was not an invasion. Why did you characterize it as such?”

“Because I consider it an invasion.”

“But do you think that you demonized immigrants in this election? Your campaign had an ad showing migrants climbing over walls.”

When Acosta again wondered how exactly a caravan was the same as an invasion, Trump grew agitated, declaring:

But Acosta wasn’t about to relent, inquiring about the Russia probe:

“I had one other question if I may ask on the Russia investigation.”

“I’m not concerned about anything with the Russian investigation because it’s a hoax. That’s enough. Put down the mic.

“I’ll tell you what. CNN should be ashamed of itself having you working for them. You are a rude, terrible person. You shouldn’t be working for CNN.”

So now reporters are rude and terrible just because they dare to ask tough questions? Isn’t that their job?

If Donald Trump wants to see some who’s truly rude and terrible, he needs to go look in the mirror. And while he’s at it, he might want to grow a spine and thicker skin.