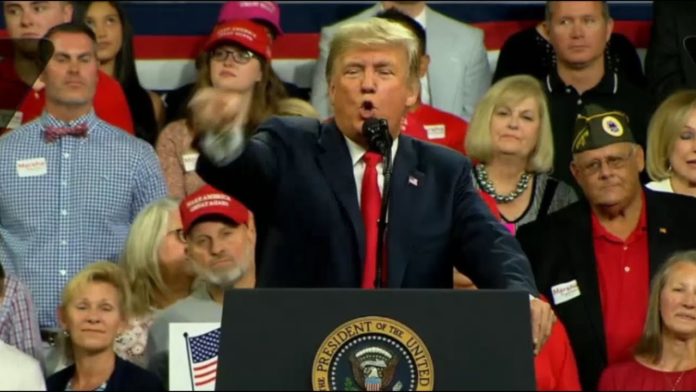 In an investigation that has lasted far longer than the pathetic investigation of Kavanaugh and allegations made by Dr. Christine Blasey Ford, Senator Chuck Grassley (R-Iowa) has been conducting a witch hunt against all the women who came forward with their stories, eventually finding one woman who recanted her story.

According to USA Today:

“Grassley, in a letter to the Justice Department and FBI, said a woman by the name of Judy Munro-Leighton took responsibility for authoring an anonymous letter that made allegations that Kavanaugh and a friend raped her. After she was tracked down and interviewed by Senate investigators, the woman recanted and said she was not the author and had never met Kavanaugh.”

On Saturday morning, Trump used the finding as an excuse to attack Democrats and question the truthfulness of the other women who came forward:

A vicious accuser of Justice Kavanough has just admitted that she was lying, her story was totally made up, or FAKE! Can you imagine if he didn’t become a Justice of the Supreme Court because of her disgusting False Statements. What about the others? Where are the Dems on this?

But unlike Dr. Christine Blasey Ford and other women who publicly came forward, Munro-Leighton did not. And Democrats never invoked her or her anonymous claims as part of their case against Kavanaugh.

Trump, of course, wants to tie Democrats to Munro-Leighton and wants to use her to attack the other women, which is wrong.

Just because one woman lied, it doesn’t mean the others did, too. After all, Ford took a polygraph and the FBI could not interview her because Trump hampered the probe from the beginning.

And Twitter users made sure to let everyone know it:

The woman that Trump is referring to is Judy Munro-Leighton, and no one heard of her before this tweet. The other numerous victims of Kavanaugh were not proven to be liars. Ford passed a lie detector test. Stop downplaying this because some random woman just was caught lying.

No Democrat ever pushed this woman’s allegations or leaked it!

So an accuser who didn’t testiy & most folks never heard of says she made up a story. How does that make Kavanaugh innocent of the rest? Not to mention the long list of lies he told in the hearing. A Supreme Court Justice who is a complete partisan & lier is what’s disgusting.

For those caring about facts: His name is Kavanaugh, not Kavanough.

The accuser the president is referring to was never a part of any Senate hearings, in fact her accusation was not even made public. https://t.co/h599Ck89xD

allegations to one person who was obviously a liar and someone who craved attention.
To tie her to the other women is horrible and trivializes the valid claims made by others which were not investigated.

Said the man who has made 6,140 disgusting false statements since he took office.

The fact is that Kavanaugh lied his ass off during his hearings but Senate Republicans jammed his confirmation through anyway in order to protect Trump. The FBI did not spend near as much time investigating allegations against Kavanaugh as Senate Republicans have been investigating the women who came forward. They are persecuting sexual assault victims in order to intimidate women from coming forward in the future and to rile up conservatives days before the midterm election. Meanwhile, an alleged sexual predator gets rewarded with a seat on the high court.