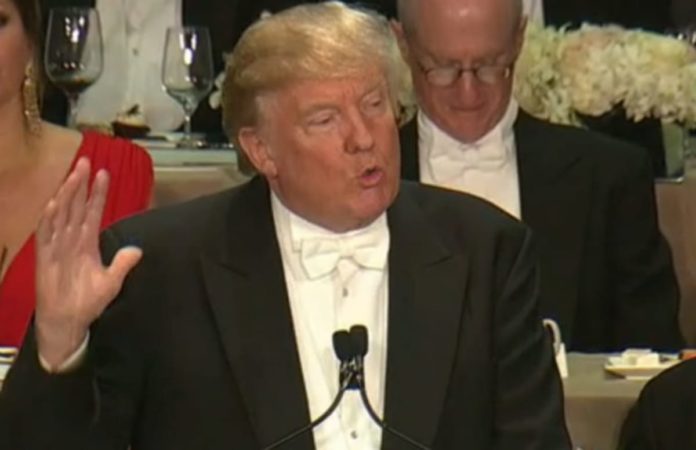 After one of the worst weeks of his presidency, Donald Trump joked at the Gridiron press dinner Saturday night that he like chaos in his administration when he wasn’t busy attacking the media for daring to cover him.

“So many people have been leaving the White House. It’s actually been really exciting and invigorating. I like turnover. I like chaos. It really is good.

“Now the question everyone keeps asking is, ‘Who’s going to be the next to leave? Steve Miller or Melania?”

Then the attacks on the media began:

“We also have some of the leading lights of the media here including some folks from the failing New York Times. That sucker is failing!”

As for CNN, which Trump constantly calls “fake news,” there was this:

“CNN, it lost a tremendous amount of credibility this year, but they also lost one of their true stars, the guy who got you the most scoops, inside info … your really very best reporter. There was nobody like him – Steve Bannon. That guy leaked more than the Titanic.”

While he was at it, the president also seemed to suggest that he might like to become an American dictator and remain as head of state for life. Trump mentioned Chinese President Xi Jinping, who is trying to remove term limits in China. And he added:

“I think it’s great. Maybe we’ll give that a shot some day.”

Surprisingly, Trump neglected to praise his favorite network, Trump TV — aka Fox News — which never fails to heap compliments and favorable coverage on the administration.

Here’s Trump at last year’s Al Smith dinner, where he made a complete fool of himself: