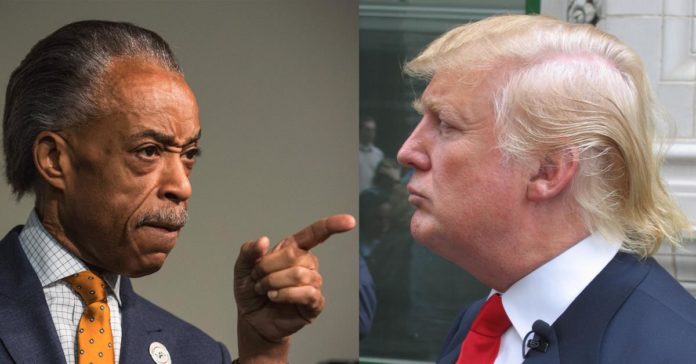 Though he’s been criticized from all quarters for his disgusting attacks on the city of Baltimore and Rep. Elijah Cummings, President Donald Trump kicked off the week with new attacks on the city and also added MSNBC host Rev. Al Sharpton to the list of African-Americans he chose to include in his racist diatribes.

Baltimore, under the leadership of Elijah Cummings, has the worst Crime Statistics in the Nation. 25 years of all talk, no action! So tired of listening to the same old Bull…Next, Reverend Al will show up to complain & protest. Nothing will get done for the people in need. Sad!

If the Democrats are going to defend the Radical Left “Squad” and King Elijah’s Baltimore Fail, it will be a long road to 2020. The good news for the Dems is that they have the Fake News Media in their pocket!

Al Sharpton would always ask me to go to his events. He would say, “it’s a personal favor to me.” Seldom, but sometimes, I would go. It was fine. He came to my office in T.T. during the presidential campaign to apologize for the way he was talking about me. Just a conman at work!

It just so happens that Sharpton was appearing on “Morning Joe” when Trump’s newest tweets were posted, and he let it be known that the president had asked to meet with him shortly after the 2016 election:

“He would support us and come to us even after I would challenge him about (the) Central Park (Five) and attacking him on the birther (conspiracy). But make this note — on December 1, 2016, three weeks after the election, he called me after seeing me on this show, ‘Morning Joe,’ and asked me to come and meet with him.”

“He was president-elect, and he wanted me to come meet with him at Mar-a-Lago. I said, ‘I will only meet with you if I can bring other leaders of national civil rights organizations. (Trump said,) ‘No, Al, I just know you, let’s meet and let’s talk.’”

And then Rev. Sharpton destroyed Trump by asking:

“Why would you want, as president-elect of the United States, to meet with a troublemaker and a con man? That’s who he is, and we know who he is. The question is, what are we going to do about it?”

As for the president’s cheap shots at Rep. Cummings, Sharpton said those prove just how deep Trump’s hypocrisy and hatred run:

“We need to stand up and deal with the fact that this president’s policies hurt people all over this country and despite people like Elijah Cummings have delivered for their district and could deliver if they were empowered that we need not get into the sideshow of a man that one minute calls you names and next minute stands up and smiling with you at your convention. He’ll do anything – including his own supporters – if it’s to his advantage. I’m not going to fall prey to that. I’m not going to bite that bait.”

Sharpton also laid a nasty burn on Trump with his own tweet:

Trump says I’m a troublemaker & con man. I do make trouble for bigots. If he really thought I was a con man he would want me in his cabinet.