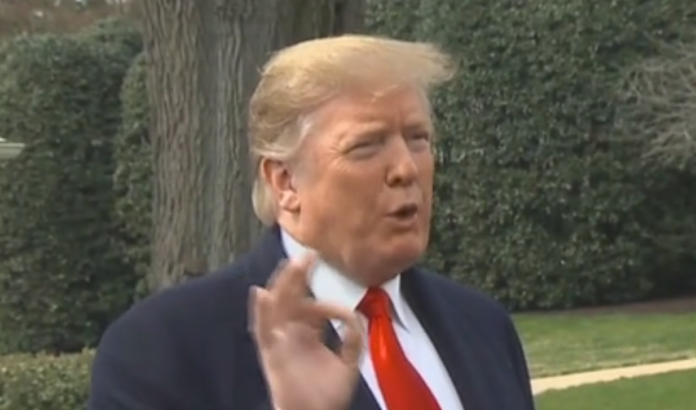 Before he left the White House to depart for Ohio, where he will visit a tank factory, President Donald Trump stood on the White House lawn and held forth on a range of topics, none of which seemed connected or relevant, suggesting that his thoughts are a whirl of confusion and random items.

The president began by telling reporters he had not colluded with Russia:

And then the lying began:

“I had the greatest electoral victory in the history in the country, tremendous success. Tens of millions of voters and now somebody’s going to write a report who never got a vote. We’ll see what the report says. Let’s see if it’s fair. I have no idea when it’s going to be released.”

Fact check: Trump DID NOT win the greatest electoral victory in the history of this country. That distinction belongs to Franklin D. Roosevelt in 1936 when he defeated Republican Alf Landon by winning 98.5 percent or 523 of the 538 electoral votes. The other blowout was Ronald Reagan over Walter Mondale in 1984, when Reagan won 97.6 percent of the electoral votes.

Trump then held up a map of territory once held by the terror group ISIS and told a reporter:

“This was on election night in 2016, everything red is ISIS. Now on the bottom, that’s the exact same, there is no red. In fact, there’s actually a tiny spot which will be gone by tonight.”

And then it was back to the 2016 election again:

“I just won an election with 63 million votes or so, 63 million. I had 206 to 223 in the electoral college, 306 to 223, and I’m saying to myself, ‘wait a minute, I just won one of the greatest elections of all time in the history of this country,’ and even you will admit that and now I have someone writing a report that never got a vote? It’s called the Mueller report. So explain that because my voters don’t get it, and I don’t get it.”

That was followed by more self-congratulation:

“I think it’s ridiculous, but I want to see the report, and you know who wants to see it? Tens of millions of people that love the fact that we have the greatest economy we’ve ever had. I’m going to Ohio right now and they’re going to close the plant and it’s where they make the tanks and it was going to be closed and I stopped them from closing it and now it’s thriving and doing great, and the people of Ohio, they like Trump because I’ve done a great job in Ohio and I’ve done a great job all over the country and that’s what the people want to hear.”

Another fact check: This is not the greatest economy the United States has ever had. As Bloomberg reported last year:

“Judging solely by gross domestic product, perhaps the simplest way to gauge a nation’s progress, the decades that followed World War II were the hottest in American history. Pent-up consumer demand, a housing boom and a vibrant manufacturing sector all melded into the economy’s Golden Age. By the GDP yardstick, the current pace of the expansion pales in comparison.”

Trump sounds frightened and defensive. Considering what he’s alleged to have done over the years, he probably should be.