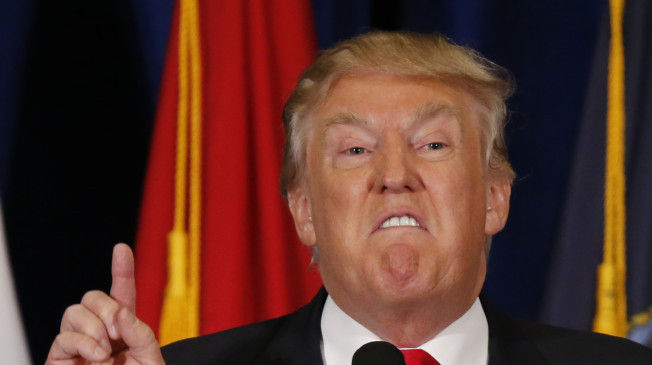 President Donald Trump lashed out at Senate Minority Leader Chuck Schumer (D-N.Y.) on Thursday morning denying that he slammed a table with his hands in anger over not getting his way on his wall, and proceeding to insist that Republicans are united behind him on the government shutdown.

Trump stormed out of a meeting with Schumer and House Speaker Nancy Pelosi (D-Calif.) on Wednesday after the Democratic duo refused to give Trump funding for his massive vanity project on the southern border, resulting in a Trump temper tantrum that Trump himself confirmed on Twitter.

But Trump is now denying that he ever slammed a table with his tiny hands and yet again insulted Schumer with unpresidential and childish language.

Cryin Chuck told his favorite lie when he used his standard sound bite that I “slammed the table & walked out of the room. He had a temper tantrum.” Because I knew he would say that, and after Nancy said no to proper Border Security, I politely said bye-bye and left, no slamming!

And then he claimed Republicans are united in support of his wall.

There is GREAT unity with the Republicans in the House and Senate, despite the Fake News Media working in overdrive to make the story look otherwise. The Opposition Party & the Dems know we must have Strong Border Security, but don’t want to give “Trump” another one of many wins!

The problem is there were other people in the room who saw Trump slam a table before he walked out.

According to an Axios report:

A source in the room tells Axios that during the meeting, Schumer said to Trump, “You are using people as leverage. Why won’t you open the government and stop hurting people?” Trump then responded, “Because then you won’t give me what I want. And I am trying to do the right thing for the country. This isn’t about politics.”

Trump later asked Pelosi if she would be in favor of a wall in 30 days, a congressional source familiar with the exchange tells Axios. When she responded no, Trump said, “What’s the point” and slammed his hands on the table, before walking out and telling the room, “Bye bye.”

It should also be pointed out that Trump has lied over 7,000 times since taking office, so it’s impossible to believe he is telling the truth about not acting like a petulant child.

As for Republicans being united, many of them actually rejected Trump’s wall over the last two years despite having control of Congress and the power to pass wall funding without Democratic votes.

As it stands, if Senate Majority Leader Mitch McConnell (R-Ky.) were to bring up the clean funding bills the House has passed without the wall, it would pass if just one more Republican crossed the aisle to vote for it under budget reconciliation rules.

Clearly, Trump is lying about his behavior during the meeting and about his Republican support.

And it’s likely more Republicans will turn on Trump the longer the shutdown drags on, especially when it begins hurting their own constituents.