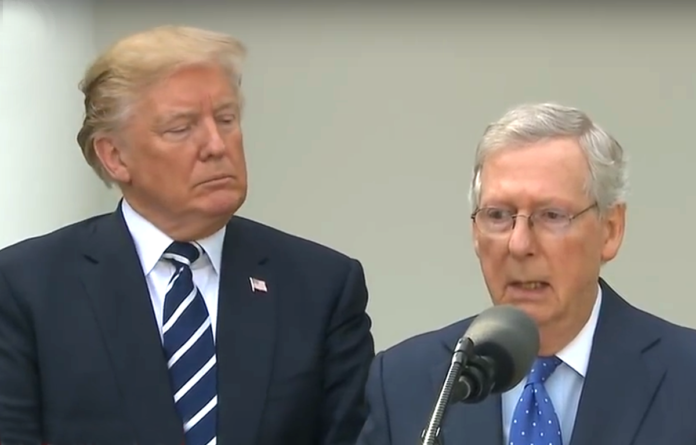 Following the release of the Barr letter, Trump’s behavior toward a variety of issues seems to have gone off the rails. However, it might be his signature issue, immigration, where he appears to be most extreme.

In an Oval Office meeting with the NATO secretary general, Trump said:

“…And to be honest, you have to get rid of judges.”

If this were any other president, this unhinged statement would have dominated news coverage for the month. Sadly, we have become used to Trump’s bizarre and extreme rants. Surely even Republicans must admit this statement runs counter to the rule of law, the American system of justice, and to the Constitution Trump swore to protect.

Do they think this comment is just benign “Trump being Trump?” To the rest of us, this remark is one of many this week that tell us Donald Trump is unfit for office and spinning into an ever-more-dangerous territory.

Trump’s statement in front of our NATO ally came immediately after he threatened to close the southern border with Mexico as soon as this weekend, which would be disastrous for the economies of both countries. We as sane Americans must, once again, explain to our allies in NATO and Mexico how embarrassing and extremely disturbing Trump’s behavior is.

…"Swear to protect and defend the Constitution." – All presidents oath.

"I have to get rid of judges." – President Donald J. Trump.

He seems to have forgotten Article III. Of the Constitution. That he has never read. And doesn't care about. pic.twitter.com/et3dhQqHOX

MSNBC correspondent, Jacob Soboroff explains why Trump’s idea to get rid of immigration judges would make the backlog at the border far worse and much more dangerous.

While Trump threatens to remove immigration judges, Mitch McConnell tried to destroy Senate rules in order to force through as many conservative judges to federal courts as possible. Quick! Before the public sees the Mueller report?

“We are going to move judges like they are on a conveyor belt,” said McConnell.

His effort narrowly failed. You’ll remember that McConnell worked to obstruct former President Obama from appointing judges, including Merrick Garland, who should rightly be on the Supreme Court right now instead of Neil Gorsuch.

“We are going to move judges like they are on a conveyor belt.” —@SenateMajLdr McConnell@SenateGOP wouldn’t give Merrick Garland a hearing.

Now they need to change the rules to force through Pres. Trump's judges? pic.twitter.com/XBWi0BChOb

With Mitch McConnell at the helm, Trump has the perfect partisan conservative enabler in place to undermine the justice system and appoint unqualified and unfit people to lifetime appointments. Yet even McConnell must secretly admit that Trump’s unhinged comments about getting rid of judges are absolutely bonkers. Even if the Mueller report fails to determine charges of obstruction, the 25th Amendment continues to look more and more advisable given Trump’s ever-more disturbing and dangerous behavior.

In two years, Trump has:

❌packed our courts with extreme, ultraconverative judges
❌abused his power in ways overruled by the courts
❌repeatedly demonstrated his contempt for the rule of law