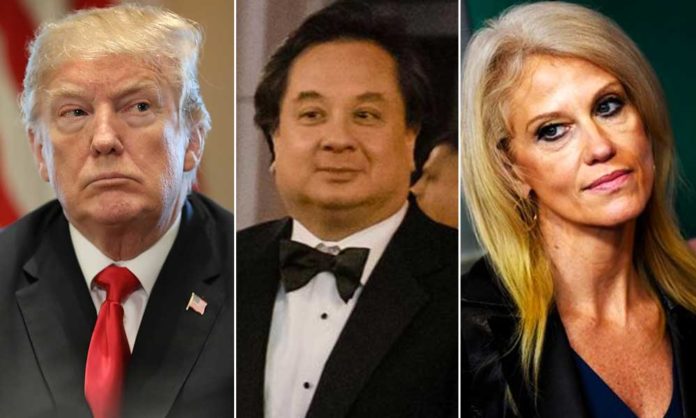 White House counselor Kellyanne Conway may have to choose between her marriage and serving President Donald Trump after Trump just escalated the feud he has with her husband George Conway.

Earlier this week, Conway warned about Trump’s deteriorating mental health by pointing out the symptoms of psychiatric disorders that correspond with Trump’s behavior.

Trump noticed, and proceeded to call Conway a “total loser.”

And that did not go very well for him because Conway, a lawyer, struck back with a devastating retort.

Congratulations! You just guaranteed that millions of more people are going to learn about narcissistic personality disorder and malignant narcissism! Great job! https://t.co/Dk9bI3sBs7

Trump clearly fell into Conway’s trap after having previously ignored his top adviser’s husband. And rather than begin ignoring him again, Trump escalated the attack by trying to emasculate him.

George Conway, often referred to as Mr. Kellyanne Conway by those who know him, is VERY jealous of his wife’s success & angry that I, with her help, didn’t give him the job he so desperately wanted. I barely know him but just take a look, a stone cold LOSER & husband from hell!

The President of the United States. https://t.co/ZSpb3UXVPC

And then he posted a reference to the film “The Caine Mutiny” in yet another shot at Trump.

In the film, the character of Captain Queeg loses it during his court-martial.

One would think that Kellyanne would jump to her husband’s defense in this particular case. After all, it’s one thing when Trump attacks others, but now he’s attacking the father of her children more directly and with low blows.

These two are definitely going to have a conversation later when they get home from work today, especially if Kellyanne doesn’t stand up for her man.