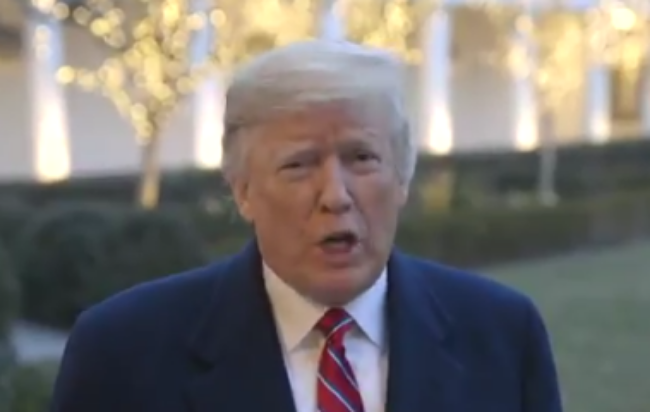 It was just two days ago that President Donald Trump had a disastrous and embarrassing meeting with Democratic congressional leaders Senator Chuck Schumer (D-N.Y.) and Rep. Nancy Pelosi (D-Calif.), in which he not only threatened a government shutdown, but also agreed to take the blame for it.

But now Trump is begging Democrats to fund his expensive border wall to avoid the government shutdown he said he would be “proud” to cause, appearing to backtrack on his promise to take the blame and blamed Democrats instead.

During the Oval Office meeting on Tuesday, Trump told Schumer that he would not blame Democrats for the government shutdown he has threatened over his wall funding, that he would take the “mantle.”

“I am proud to shut down the government for border security, Chuck,” Trump said. “I will take the mantle. I will be the one to shut it down. I’m not going to blame you for it.”

Surprise, surprise, it turns out that Trump lied. He released a video on Thursday accusing Democrats of being hypocrites on border security and begged them to pass funding to avoid a shutdown.

Let’s not do a shutdown, Democrats – do what’s right for the American People! pic.twitter.com/bZg07ZKQqo

The problem is that Democrats have gladly passed funding to repair existing fences along the border. Plus, nearly 60 percent of Americans oppose building the wall, which means Democrats are already doing what’s right for the American people by not funding Trump’s vanity project.

Trump royally screwed himself on Tuesday by taking ownership of a government shutdown that hasn’t even happened yet, making it clear that he and Republicans are on the hook for any shutdown, which would occur during the Christmas season.

Donnie dementia, forgot what you said 2 nights ago? Any shutdown is on you.

What do you mean Democrats? You said you would take the “mantle” of a shutdown (Notice the proper use of quotation marks).

You loser, you told Senator Schumer that you’d own the shutdown, yet here you are, being a busted old fool trying to pin it on someone else. You’ll never be a man who can stand up and take blame for anything, that’s why you can’t find a COS besides Kid Rock.

YOU CLAIMED RESPONSIBILITY FOR IT. Do you not understand how audio-visual recordings work?

Sorry man, you already owned it. Besides, it was your idea to put that on the table. Don’t even try.

I don’t normally shut down the government, but when I do I try to blame it on others

You literally said, ON TV, you’d be happy to shut it down. How in the fuck does anyone believe you?

#Democrats aren’t responsible for a Government Shutdown. You are. You said it on camera over and over that you’d be proud to shut it down. Stop throwing tantrums when you don’t get your way.#GovernmentShutdown

It’s time for Trump to abandon his wall fantasy. It’s not going to happen. Republicans will be blamed for any shutdown. After all, the GOP controls the House and Senate and Trump has already taken credit for any government shutdown that occurs if he doesn’t get his way. It’s too late to pretend that Democrats are to blame.