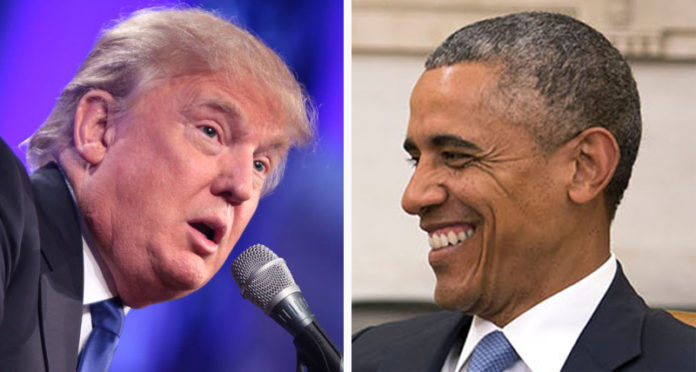 How insecure is President Donald Trump? So much so that he’s emailing a pathetic poll to his supporters in which he begs them to say that he’s more successful and better than his predecessor, Barack Obama.

On Friday, Trump’s reelection campaign sent a mass email to supporters asking them to fill out a poll designed to make Trump look better than his predecessor, President Barack Obama.

“It’s no secret that Obama’s presidency was a disaster,” said the email. “Please take our Official Trump vs. Obama Poll and let us know who you think is the better President.”

The email linked to a poll on Trump’s official website titled, “Official Trump vs. Obama Poll.” It consists of 10 loaded questions designed to make Trump the overwhelming favorite.

Here’s a few of the questions:

Notice how the questions are all written in the present tense? Obama is no longer in office, but he’s living rent-free in Donnie’s head, much like Hillary Clinton. It’s a wonder there wasn’t a question asking if the Department of Justice should “lock her up” immediately.

All of this comes the same week that Trump officially kicked off his 2020 re-election campaign in Orlando, Florida, which turned into a epic whinefest, with Trump declaring that he had been the subject of unprecedented attacks from Democrats since taking office. Kinda makes you wonder if Trump was living under a rock inside a sealed cave during the eight years Obama was in office and Republicans in Congress obstructed everything he tried to do.

And while polling shows that Trump is losing to many of the 2020 Democratic candidates for president, he also loses in head-to-head polls comparing him to Obama. A PPP poll conducted in January ranked Obama the best president of the last 40 years.

No wonder Trump feels inferior to Obama. As he proves each and every day, he most certainly is.