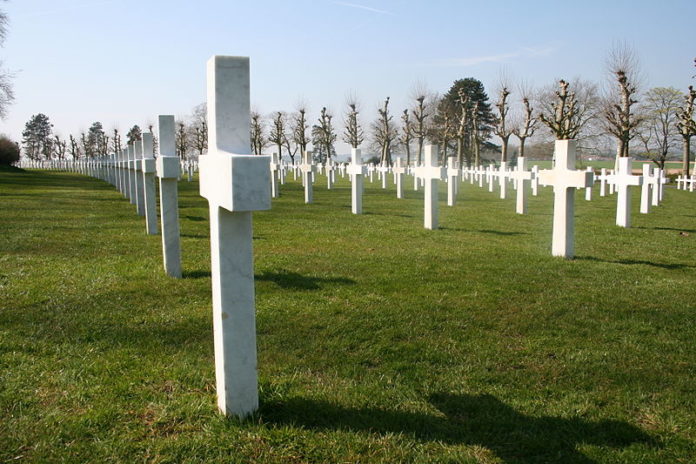 President Donald Trump seemed all set to attend a ceremony honoring fallen American soldiers at the Aisne-Marne American Cemetery and Memorial near where the Battle of Belleau Wood was fought in France during World War I, but canceled over a little rain.

Earlier in the morning, Trump had tweeted his supposed enthusiasm to attend the ceremony, claiming that there’s nothing better than celebrating the end of a war.

You know, especially since the end of a war means you won’t have to dodge the draft again, something Trump did five times during the Vietnam War.

When you think about it, the Americans who died at Bellau Wood went through absolute hell just as many Americans did throughout World War I. It was one of the bloodiest and  most ferocious battles in history. And it has become part of United States Marine Corps lore.

Yet, despite the hell these men went through for their country and our allies, Trump won’t even bother to show up at the American cemetery to honor these heroes because of a little rain.

And Twitter users shamed him for his cowardice and dishonor, especially since past presidents have honored the troops in the rain before, including former Presidents Bill Clinton and Barack Obama:

But – it is raining – so Trump and Melania have cancelled their scheduled visit to the Aisne-Marne American Cemetery and Memorial – The cemetery contains the graves of nearly 2,300 war dead, many of whom fought in the area in the summer of 1918. But hey, can’t get the hair wet.

I’ve just checked out France’s weather and the visibility is @ 7.0 miles with the rain. On a great day visibility is 10.0 miles. So what is your real excuse for not going to Aisne-Marne Cemetery, what will you do with your free 6 hours. Visit Putin or nap? My guess is the 1st.

or actually show up for the ceremony with @EmmanuelMacron and #Merkel. I am in France watching the ceremony on TV and although I hate his face, I am embarrassed the USA is not appropriately represented (not that #TinyTrump is appropriate). btw not raining now. No sense of duty

A lot of American boys, who answered rather than dodged the call of duty, died in worse weather than that which you failed to brave today.

Hope you enjoy the extra executive time on their dime.

It’s a Marine Corps helicopter. It can handle “drizzle.” Get in and go to the memorial. And, hey, the French have these things called umbrellas. No excuses.

Never again can Republicans claim to love and respect the troops. Trump has once again disgraced the office of the presidency, betrayed the men and women who put on the uniform to serve our country, and embarrassed the nation as a whole by refusing to honor the sacrifices made by American troops during World War I just because he doesn’t want to get his hair wet. And it’s time for conservatives to see him for what he is: A coward who doesn’t care about our military.