The United States Blues
Home Economics Trump biographer: Donald is hiding his tax returns because his net worth... 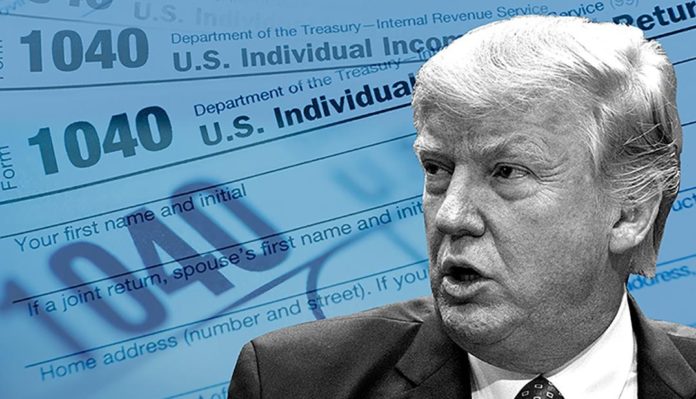 On Friday, Speaker of the House Nancy Pelosi (D-CA) announced that Congressional Democrats would indeed begin the process of obtaining President Donald Trump’s tax returns from the IRS, remarking in a statement:

“Every day the American people and Congress learn more about President Trump’s improprieties, from conflicts of interest to influence peddling, potential tax evasion and violations of the Constitution – all roads leading back to President Trump’s finances. These improprieties, and the lack of transparency around them, give the House legitimate legislative, oversight and legal reasons to review the President’s tax returns.”

What might Trump be trying to hide by keeping his tax returns hidden? Some have suggested the documents might show evidence of money laundering or illegal deductions. But Trump biographer David Cay Johnston says he thinks the real reason is that Trump has a net worth of “less than zero.”

In article he wrote for The Daily Beast, Johnston notes:

“What Trump does is spend enough money to create the appearance of being a billionaire, something I’ve been reporting since I got hold of his financial statement in 1990, which showed he was no billionaire.”

Trump’s claims of being a billionaire are done with smoke, mirrors, and bluster, Johnston then reveals:

“That fantastic increase was not the result of Trumpian deal making. Instead, Trump simply added a line for the value of his brand, which is his last name. He put down $4 billion.

“I get that. My full name, unique as far as I know among all seven billion humans, is my brand. It’s helped me to make a nice living and travel around the world and raise eight kids. My brand’s worth is $3 billion. At least. Prove otherwise.”

As a result of Trump’s slight of hand, there’s a very good chance that the 45th president has a net worth of less than zero:

“Creating a lifestyle that lets him pose as a billionaire costs less than $12 million annually, I estimate. And he achieves that not through building wealth, but through his work as a financial locust who devours other people’s money through moving from one shady deal to the next.

“don’t be surprised if his net worth turns out to be less than zero, as Trump was forced to admit in 1990 when I reported that his net worth was negative $295 million, meaning that you are probably worth more than Donald Trump.”

Imagine the humiliation for the braggart-in-chief when the entire world learns he’s in the red financially. Granted, he’ll scream “fake news!” but the numbers don’t lie.