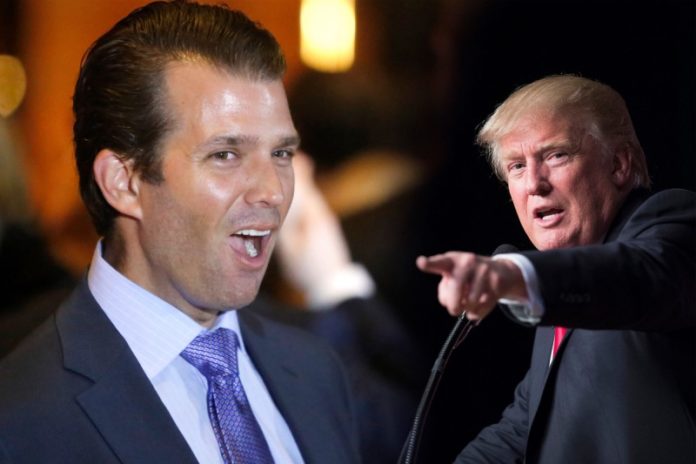 During his testimony before the House Oversight Committee on Wednesday, President Donald Trump’s former attorney, Michael Cohen, noted that the president’s oldest son, Don Jr., has terrible judgement and proved it by setting up that infamous June 2016 meeting with Russian nationals at Trump Tower, telling the committee:

“What struck me as I looked back and thought about that exchange between Don Jr. and his father was, first, that Mr. Trump had frequently told me and others that his son Don Jr. had the worst judgment of anyone in the world. And also, that Don Jr. would never set up any meeting of any significance alone – and certainly not without checking with his father.”

Cohen’s comments led to an enlightening conversation on the MSNBC show “Deadline: White House,” with host Nicolle Wallace asking her guest, Vanity Fair reporter Emily Jane Fox to weigh in on just how dense Don Jr. is. Fox, who wrote a biography of the president entitled Born Trump: Inside America’s First Family, was told by the host:

“I heard from sources close to the president that he thought Donald Trump, Jr. was an idiot.”

“Idiot is a strong word, but I will say, in my reporting, it is not my understanding the president thinks Don Jr. is his smartest child. That’s how I understand how he thinks of Don, Jr.”

Eric Trump, on the other hand, has often been portrayed as the not so sharp son, but Fox said that’s caricature of Eric is far from the truth:

Junior proved just how clueless he is on Twitter Thursday evening, tweeting out this:

Even Bloomberg, a financial news station, pushing the leftist misinformation campaign that lower tax refunds means anything. Shame on you.

Reality 90% of US households are benefiting from tax reform. If your refund is lower it’s because you paid less & the code was simplified. https://t.co/9yZ4itcj4z

Lower tax refunds have millions of Americans very upset. They depend on that money for things like sending their kids to school and taking a vacation once a year. And refunds are down across the country. Except, of course, for rich trust-fund babies like Don Jr.

Clearly, Don Jr. is not the sharpest knife in the drawer. And that’s really saying something, because to be seen as not very bright by as a man as intellectually incurious as Donald Trump makes you just a few IQ points short of being a rock.