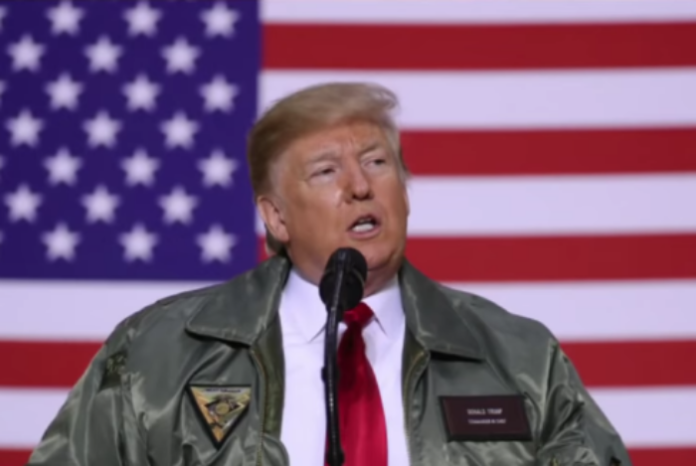 President Donald Trump stayed up late on Monday night to rant about “endless wars” and how they will come to a “glorious end” in a late-night tweet that drew mockery from Twitter users.

The American people got to enjoy a few blissful hours of Trump not tweeting about anything after he announced his intention to speak from the Oval Office during prime time on Tuesday evening until nearly midnight on Monday when he decided to muse about war for some reason.

Endless Wars, especially those which are fought out of judgement mistakes that were made many years ago, & those where we are getting little financial or military help from the rich countries that so greatly benefit from what we are doing, will eventually come to a glorious end!

It’s obviously an odd post. But as nice as it is to think about the world not being at war for once, actions speak louder than words, and Trump has been nothing but talk since taking office.

After all, he’s the one that involved the US military in Yemen and increased participation in Syria. And even when he announced withdrawal from Syria, he was lying because Trump recently claimed that American forces are staying put while denying that he ever lied about ISIS being defeated.

Trump has also threatened to use nuclear weapons and has ignored Russian aggression while attacking our allies, which he did in this tweet by once again accusing them of taking advantage of us.

Of course, that’s not true since our allies have been fighting and dying along side us in the Middle East since 9/11.

And as long as Trump is creating chaos in the world, war will never end.

Twitter users responded appropriately by pointing out Trump’s hypocrisy and hilariously mocking him.

• We were leaving Syria immediately

• Then We were leaving Syria in 120 Days

• Now we are staying in Syria indefinitely!

Why did you increase our war budget (and deficit) many billions of dollars if you are serious about this promise? Seems fiscally irresponsible, no?

I can see a glorious end to something else too. pic.twitter.com/gyl4v4qbDI

What, in your vast military experience, is a glorious end?

What the fuck does that even mean? We have a simpleton in the White House with a retarded understanding of sentence construction, no understanding of military history and a lifelong dedication to self preservation.

Trumps impeachment & arrest will B the only GLORIOUS END

For those who value something other than money

Yea I’d say other countries have paid a price pic.twitter.com/DQA94GO6TI

Unless you count unknown numbers of dead as glorious.

America should not be fighting wars based on how much financial help we get. ONLY to defend and protect FREEDOM.

Jesus…I wish Fred would’ve pulled out before the “glorious end”.

Perhaps humanity will put an end to war one day, but Trump will not be the president who helps turn that dream into reality.