The United States Blues
Home News Trump Blames His Refusal To Attend World War I Memorial On The... 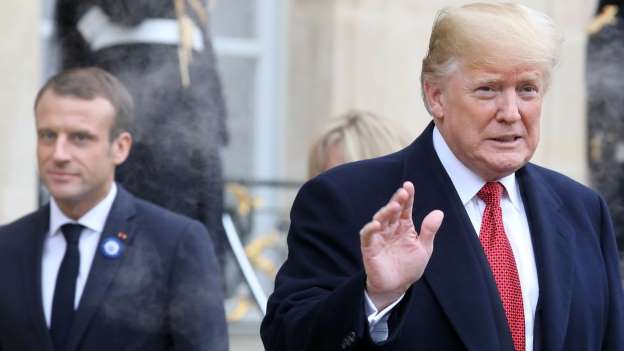 Over the weekend, while visiting France for celebrations marking the end of World War I in 1918, President Donald Trump skipped out on a visit to a cemetery holding the remains of soldiers who gave their all to preserve freedom. The reason Trump was a no-show? Because it was raining.

After two days of endless criticism from across the globe, Trump decided he’d pull one of his patented head fakes and blame others for his absence at the World War I memorial. Specifically, he blamed the people charged with protecting him, the U.S. Secret Service:

By the way, when the helicopter couldn’t fly to the first cemetery in France because of almost zero visibility, I suggested driving. Secret Service said NO, too far from airport & big Paris shutdown. Speech next day at American Cemetary in pouring rain! Little reported-Fake News!

Yes, he even managed to get a “fake news” reference in there. Oh, and he misspelled cemetery.

Keep in mind Trump also neglected to appear yesterday at Arlington National Cemetery to honor American veterans on Veteran’s Day. Again, because it was raining. And yet this is the same Donald Trump who claimed before he left for France that he could never forgive former President Barack Obama for “what he did to our United States military.” Obama, however, always showed up at Arlington on Veteran’s Day, even when it was raining.

Social media wasted no time skewering Trump for his own insecurity:

BS. Every other leader managed to get to their services, with no issues, incl Kelly, and the weather looked fine. Stop blaming the USSS, and just admit that you didn’t feel like it 🙄🤬🤮

That doesn’t explain how you still didn’t have the courage to go to Arlington yesterday…it’s only 2 miles from the @WhiteHouse…but yes, it was drizzling, and we all know your wig is more important that honoring veterans. pic.twitter.com/PjRcni4yae

So a little French rain bothers you yet a yellow drizzle from Russia w love floats your boat! Got it! pic.twitter.com/0vFz84EmdS

If Trump doesn’t want to get rained on, has he ever considered using an umbrella?