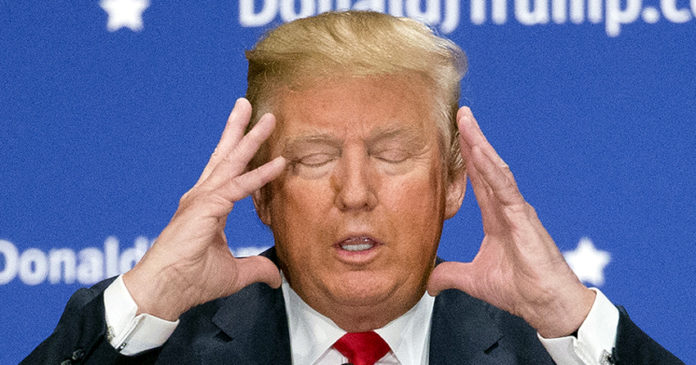 President Donald Trump is crumbling inside the White House as he blames Republican leaders in Congress for his failure to get funding for his border wall.

The Senate passed a clean continuing resolution on Wednesday night to fund the government through early February, which is causing House Republicans to freak out because they may be forced to vote for it, which is why they are demanding Trump tweet about whether he will sign it or not if they do.

MSNBC’s Kasie Hunt reported on Thursday that House Republicans are panicking and are “scrambling” to put wall funding up for a vote.

On the House floor, leaders scrambling to see if they can pass $5 billion in wall funding as Republicans say they want President Trump to tweet before they say “yes.”

“That’s what the fuck serving in Congress has come to,” one GOP member of Congress tells me.

Even if the motion fails, Republicans can then say they have cover to vote for the resolution as is without it.

Path today might be putting $5 billion in wall funding on the House floor, likely going down — to prove it can’t pass

Then possibly proceed to an clean CR vote? #mess

Trump has been taking a beating all day from even his most sycophantic supporters, including Fox & Friends host Brian Kilmeade, who roasted Trump for “caving.”

But it’s not clear Trump will sign the resolution and he reinforced that uncertainty on Twitter by whining about Republican leadership in Congress, suggesting he’s prepared to pin the blame on them if he doesn’t get what he wants, which would hurt their re-election prospects among the conservative base.

When I begrudgingly signed the Omnibus Bill, I was promised the Wall and Border Security by leadership. Would be done by end of year (NOW). It didn’t happen! We foolishly fight for Border Security for other countries – but not for our beloved U.S.A. Not good!

This is quite the switch from his attacks on Democrats in recent weeks. The problem is that Trump has already accepted blame for any government shutdown that occurs, which puts him in a politically untenable position.

If he signs the bill without border wall funding he will be slammed from the right-wing for caving, but he’ll be blamed for the shutdown by everyone else, which hurts his re-election chances in 2020. And if he blames Republicans in Congress that could weaken their position heading into 2020, when Republicans could very well lose control of the Senate and the presidency. Furthermore, Republicans will remember that Trump threw them under the bus, which could even further hinder his agenda.

New York Times journalist Maggie Haberman reports that Trump is in a “tailspin” over the resolution.

Source close to White House says potus is in “tailspin” this AM about the CR. https://t.co/aZCpC2Xjmq

It really appears that Trump is screwed no matter what he does on this issue. And there’s no way out of it because he has been incessantly tweeting demands and threats about it for weeks and months now even though wall funding will not be supported by Senate Democrats. And Trump really can’t blame them for any shutdown because Trump is on tape proclaiming that he has no problem shutting the government down and taking the blame for it. So, he squandered any leverage he may have had in that Oval Office meeting two weeks ago.

That leaves either Trump or Republicans in Congress to blame, and that’s not a good position to be in because it hurts the party either way. Trump is looking incredibly weak and the House Freedom Caucus does not have the power to save him. The question is whether they’ll be able to save themselves after they concede to the reality that wall funding is not going to happen.