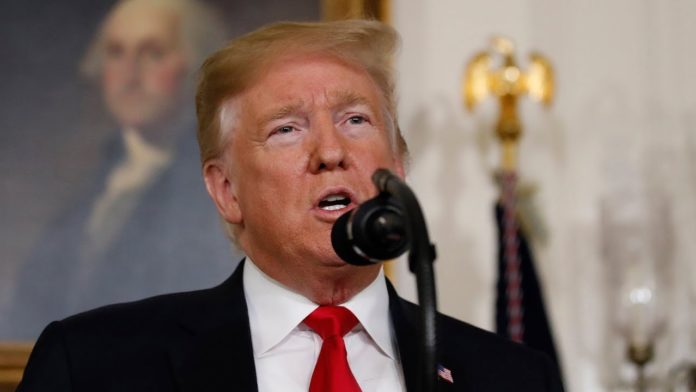 Speaking from the White House Monday morning, President Donald Trump attempted to blame the internet and mental illness for the mass shootings in El Paso, Texas, and Dayton, Ohio, over the weekend which left 29 people dead and dozens wounded.

Surprisingly, Trump did actually manage to say that white supremacy must be defeated in the United States:

“The shooter in El Paso posted a manifesto online consumed by racist hate. In one voice, our nation must condemn racism, bigotry and white supremacy. These sinister ideologies must be defeated. Hate has no place in America. Hatred warps the mind, ravages the heart and devours the soul.”

The hypocrisy of such a statement coming from Trump cannot possibly be overstated. This president has repeatedly condemned immigrants, calling them “rapists” and suggesting that the U.S. is being “invaded” by those seeking asylum.

In his remarks, Trump also called for bipartisan solutions to the problem, but failed to suggest that gun control legislation might be needed:

“[W]e must honor the sacred memory of those we have lost by acting as one people,” Trump said. “Open wounds cannot heal if we are divided. We must seek real bipartisan solutions. We have to do that in a bipartisan manner that will truly make America safer and better for all.”

But in the next breath, the president tried to place the blame for violence in the nation on video games and social media, even suggesting censorship of online sites which host controversial discussions. The suggestion of somehow trying to impose controls on the internet is controversial and very possibly unconstitutional, meaning that any laws to control hate speech may well be unconstitutional and doomed to failure.

Most galling, however, was that Trump failed to take even a shred of the blame for the disgusting things he’s said, especially at this political rallies, where he suggests that shooting immigrants crossing at the U.S.-Mexico border might be a good idea or calling Democratic members of Congress socialists and suggesting they “go back” to where they came from.

Perhaps the best retort to Trump and his blatant hypocrisy came from Senator Cory Booker (D-NJ), who is seeking the 2020 Democratic nomination. Booker noted: