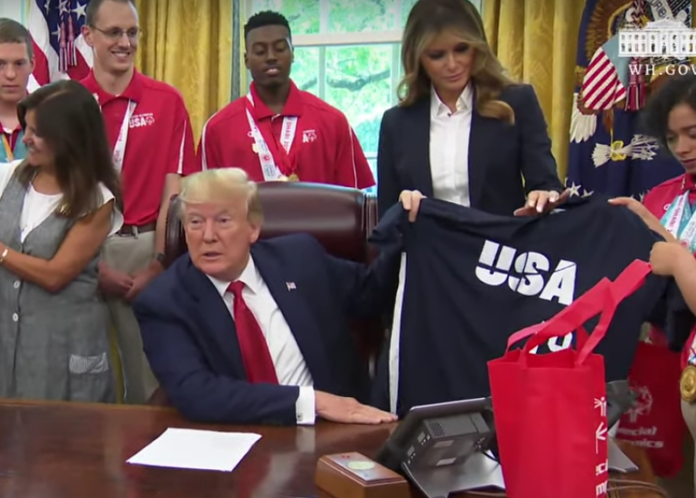 President Donald Trump pretended to enjoy the company of the United States Special Olympics Team on Thursday, only to get skewered in response for how he has treated disabled people.

In yet another photo-op to fake how much he cares, Trump received the Special Olympics team at the White House and posed with them in the Oval Office just months after nearly gutting funding for the program that these athletes deserve so he can fund his tax cuts for his wealthy buddies.

Trump was forced to restore the funding after national outrage ensued.

It also comes three years after Trump ruthlessly mocked a disabled reporter at one of his hateful campaign rallies in 2016.

Today, @FLOTUS Melania and I were honored to welcome members of Team USA to the @WhiteHouse for a great celebration of their success during the 2019 @SpecialOlympics @WorldGamesAD! Congratulations @specialolyUSA! #Cheer4USA pic.twitter.com/m7PcT6N1KO

Considering Trump’s past disdain for the Special Olympics and disabled people, the event certainly reeked of awkwardness, and people were not fooled by it one bit as they called Trump out in response and reminded him of how he really feels about them.

Sadly alot of special needs was cut and some had busing cut off so we are going through the roughest of times with this spectrum because his greedy friends !

Why did you try to cut special education funding to pay for tax breaks for rich people?

You tried to defund the Special Olympics. The nerve of you. #RemoveTrump

Did you perform for them? pic.twitter.com/6jii78YZaS

You did your best to cut funding for the Special Olympics.

Did you mock them too? pic.twitter.com/z17cZLMjDq

Bless those kids hearts. I hope you didn’t mock them too.

Given Trump’s behavior toward women and the LGBT community, the USA Women’s Soccer Team chose not to visit the White House. Trump’s behavior toward the Special Olympics and disabled people should have resulted in the same decision for the Special Olympics team. Because it is pretty clear that Trump does not deserve to have photo-ops with people who actually worked hard through adversity to get where they are.