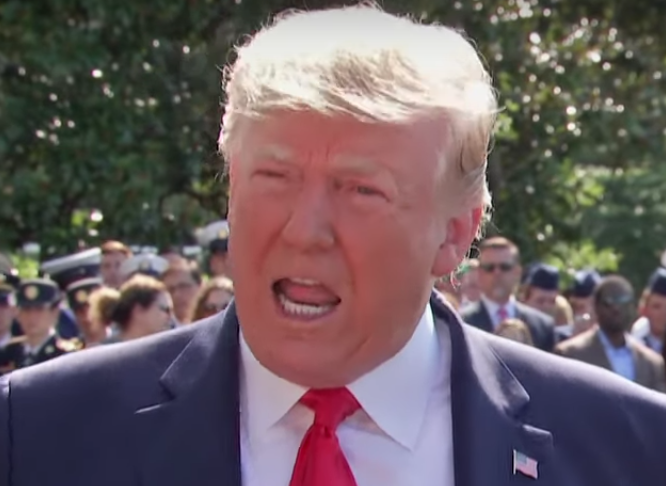 President Donald Trump spoke with reporters outside the White House before traveling to Wisconsin on Friday, not only defending his disgraced Secretary of Labor Alex Acosta, but also launching attacks on Democrats and Special Counsel Robert Mueller.

Acosta resigned Friday morning as the “sweetheart deal” he gave child sex trafficker and pedophile Jeffrey Epstein has become a major source of embarrassment for him and the administration.

Trump defended Acosta while talking to the media and insulted Epstein’s victims by referring to them as people who didn’t like the deal. Then he distanced himself from Epstein by laughingly claiming that he was “not a fan” of him even though Trump knew Epstein for years and attended his parties, even going so far as to speak fondly of him on several occasions.

He would then go on to brag about himself by claiming to have done more than any president in history, that he has done more for the military than anyone and took credit for programs signed into law by former President Barack Obama before launching a diatribe against House Democrats investigating Russian interference in the 2016 Election.

“How many bites of the apple do you get?” Trump whined. “We’ve gone through 500 witnesses, 2,500 subpoenas, I’ve let them interview my lawyers because I had nothing to do with Russia. Now that’s come out — there was no collusion. But how many people and how many times, and this has been going on for two-and-a-half years. Rush Limbaugh has said that there is nobody else he knows who could have taken it. On top of taking it, I’ve been a great president.”

Seriously. If a brutal dictator who hates Americans is “happy,” Trump is clearly doing his job wrong.

But then he turned his ire back to Democrats and accused them of trying to smear Acosta even though Acosta is the one who hurt himself by giving a deal to a pedophile that never should have been offered in the first place.

“The Democrats aren’t working, all they’re doing is trying to hurt people like Alex Acosta,” Trump said. You know what I know about Alex? He was a great student at Harvard. He is Hispanic, which I so admired because maybe it was a little tougher for him, maybe not. But he did an unbelievable job as the secretary of labor. That’s what I know about him. I know one thing. He did a great job, and until this came up, there was never an ounce of problems with this very good man.”

Not only did Acosta let Epstein off the hook, but he has also continued to help child sex traffickers, most notably by attempting to slash funding for an agency inside the Department of Labor that helps victims of trafficking.

Acosta should never have been appointed to his position and now that he has resigned, it’s Trump’s turn, because at least Acosta has never been accused of raping a child.