The United States Blues
Home News Trump Brags That His ‘Gut’ Is Smarter Than ‘Anybody Else’s Brain’ In... 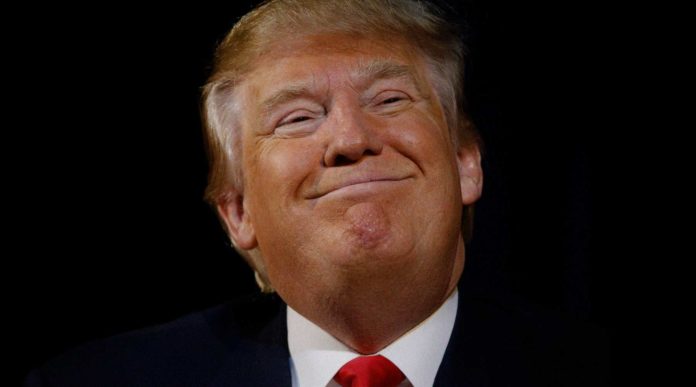 For some reason, President Donald Trump thought it would be a great idea to give an extensive interview to the Washington Post, but what he had to say proves that his mental capabilities are fading by the minute.

Trump began the interview by complaining about Federal Reserve Chairman Jerome “Jay” Powell, whom he appointed to the position. According to the president, interest rate hikes by the Fed are to blame for the recent declines on Wall Street and GM’s announcement that it will cut 15 percent of its workforce and close five plants:

“I’m doing deals, and I’m not being accommodated by the Fed. They’re making a mistake because I have a gut, and my gut tells me more sometimes than anybody else’s brain can ever tell me.

Trump also commented on the recent federal report on climate change which says global warming is a threat to both the health and long-term financial security of Americans. To that, Trump commented:

“One of the problems that a lot of people like myself, we have very high levels of intelligence but we’re not necessarily such believers. You look at our air and our water, and it’s right now at a record clean.

When the interview turned to Russia, The president was asked by recent actions by the Russian navy, which seized three Ukrainian ships and their crews Sunday. Trump hinted he might cancel his planned meeting with Russian President Vladimir Putin at the upcoming G-20 summit in Buenos Aires:

The president also doubled down on his ardent defense of Saudi Arabian Crown Prince Mohammed bin Salman, whom the CIA says ordered the brutal murder and dismemberment of journalist Jamal Khashoggi:

“Maybe he did and maybe he didn’t. But he denies it. And people around him deny it. And the CIA did not say affirmatively he did it, either, by the way. I’m not saying that they’re saying he didn’t do it, but they didn’t say it affirmatively.”

But, as the Post noted, Trump’s statement isn’t exactly true:

“The CIA based its overall assessment of Mohammed’s role on a number of pieces of compelling evidence, including intercepted communications; surveillance from inside the Saudi Consulate in Istanbul, where Khashoggi was killed in October; and the agency’s analysis of Mohammed’s total control of the Saudi government.”

Asked if he would interfere with the investigation being conducted by Special Counsel Robert Mueller, Trump refused to rule out such a move, but did say:

There was no indication if Trump was speaking from his brain, his gut, or the approved script his attorneys gave him when he made the comments about the special counsel.