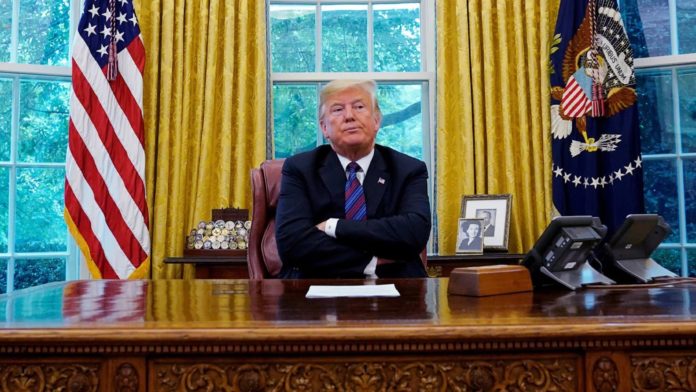 As we all know, Trump dodged the draft five times during the Vietnam War, finally getting a doctor to diagnose him with bone spurs the final time because he could no longer get a college deferment.

Blumenthal, on the other hand, served with the Marine Corps reserve during and after the war and could have been sent to fight at any time had his unit been called up.

Yet, Trump continues to bully Blumenthal because he misspoke a couple of times about his service during the war on the campaign trail. Rather than say he served during the war, he said: “in Vietnam.”

It’s a mistake that the senator has apologized for making, but Trump won’t let it go. And he actually had the gall to brag about being in Vietnam on Twitter Wednesday.

I have now spent more time in Vietnam than Da Nang Dick Blumenthal, the third rate Senator from Connecticut (how is Connecticut doing?). His war stories of his heroism in Vietnam were a total fraud – he was never even there. We talked about it today with Vietnamese leaders!

Again, Blumenthal never told such stories, and Trump never served a day in the military. And if Trump wants to talk about fraud, we can trot out his Trump University lawsuit that he lost. Or we can talk about his fraudulent bone spurs.

Twitter users were certainly offended, which is why they ripped Trump a new one.

Trump has some nerve to attack Senator Richard Blumenthal who actually did serve in the Marine Corps Reserves from 1970 to 1976 within the United States. Trump, on the other hand, had two doctors commit fraud and lie about him having bone spurs so that he could dodge the draft.

https://t.co/xiA7a3jjaa
Donny’s bonespurs healed up, right after the Vietnam war.
A minor medical miracle, as usually they don’t just dissappear without any treatment.

Blumenthal had the courage to apologize: “I have firmly & clearly expressed regret & taken responsibility for my words. I have made mistakes & I am sorry. I truly regret offending anyone. I will always champion the cause of Connecticut’s & our nation’s veterans.”

You to Cohen: ‘You think I’m stupid, I wasn’t going to Vietnam.’

You allegedly told Michael Cohen there was no chance of you deploying during the Vietnam War.

So let me get this straight: Kim Jong Un is just a misunderstood murderer and a really great guy who just wants to blow up our country, and a United States Senator is the enemy?

On the other hand, he spent six years serving in the US Marines Corps Reserve, which is six years more than Mr Trump, who avoided all service by claiming he had “bone spurs”.

how much time have you spent in Vietnam compared to the soldier who took your place in 1968, Generalissimo Bone Spurs?

Trump may be in Vietnam, but he is 50 years too late. And if a war were still raging there, he wouldn’t be there right now.