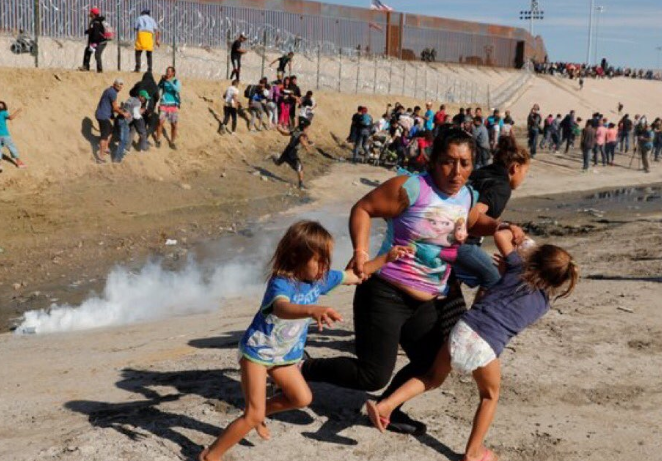 President Donald Trump ramped up the border crisis on Sunday by letting border patrol agents fire tear gas into crowds of women and children seeking asylum, only to refer to the migrants as “criminals” in a heartless tweet Monday morning.

In a violation of the Geneva Convention and human rights, Trump denied asylum to migrants at ports of entry and had them tear gassed. This comes as he continues to take children away from their parents to lock them in cages in internment camps, which is a crime against humanity.

Images and video or the harrowing ordeal these women and children are going through at the border just to seek peace and safety are heartbreaking.

But Trump does not care, which is why he labeled them as “stone cold criminals” and once again threatened to shut down the border while demanding Congress fund his useless border wall.

Mexico should move the flag waving Migrants, many of whom are stone cold criminals, back to their countries. Do it by plane, do it by bus, do it anyway you want, but they are NOT coming into the U.S.A. We will close the Border permanently if need be. Congress, fund the WALL!

Of course, closing the border will hurt Americans, too.

The U.S. State Department estimates that $1.7 billion in goods and services, and hundreds of thousands of people, legally cross the border each day. The U.S. gets nearly half (44 percent) of its fresh fruits and vegetables from Mexico, according to the U.S. Department of Agriculture.

So, Trump could close the border, but Americans would have a whole lot fewer fruits and vegetables on the dinner table as thousands of jobs are placed in peril.

But Americans should be angrier about the human rights violations Trump is committing, not to mention his violation of U.S. law by blocking migrants from seeking asylum at legal ports of entry.

There is NO justification for this. Ever. Period. There is clearly a fucking wall around your soul… #trump #caravan pic.twitter.com/ybaKEvynMs

Trump warns that the caravan includes many “stone cold criminals” – You mean like Paul Manafort, Michael Flynn, George Papadopoulos and Rick Gates?! All Trump advisors and aides going to jail. And many more TBA!!

As a citizen of the United States,
I hereby condemn the actions taken today at the U.S. border in San Ysidro, the firing of tear gas by Border Patrol at migrant women & children.

I call for the President of the United States to be held responsible for crimes against humanity.

We’ve seen the receipts, dewd. Few, if any of them are “cold stone criminals. Most of them are children and families fleeing violence that, in many cases, was the direct result of America’s actions. Your administration tear gassed children, and that is on you forever.

Stone Cold Criminal Flag waving Migrants? Like the baby girl in the flip flops you had tear gassed?

Oh yea… they look SO DANGEROUS!! What are you going to do about the BIGGEST THREAT to Americans right now: WHITE AMERICAN MASS-MURDERING MALES??? #MakeAmericaSafeAgain pic.twitter.com/SkUMhENKup

There’s a fine line between national security and insanity. You sir have crossed it.