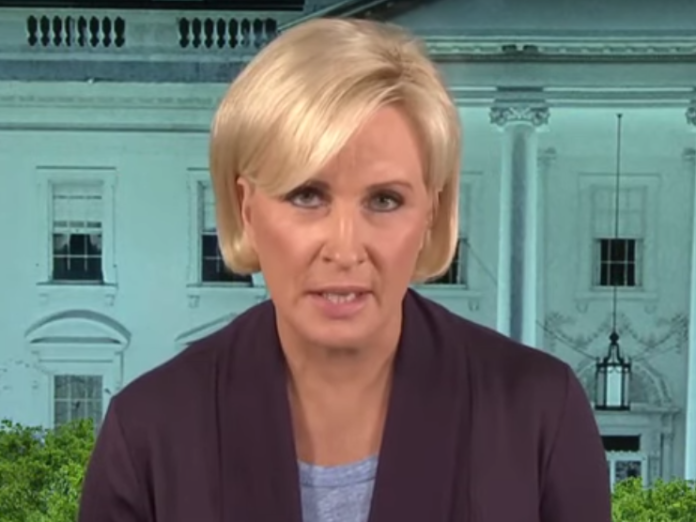 Not content with putting his racism on full display as he has done in recent weeks by attacking four Democratic congresswomen of color and most recently by attacking Rep. Elijah Cummings (D-Md.), Trump decided to put his sexism and misogyny on display as well by targeting Mika again despite claiming that he doesn’t watch the MSNBC program.

Wow! Morning Joe & Psycho ratings have really crashed. Very small audience. People are tired of hearing Fake News delivered with an anger that is not to be believed. Sad, when the show was sane, they helped get me elected. Thanks! Was on all the time. Lost all of its juice!

Mika soon responded, not by addressing the attack on her directly, but by telling a story about her wedding ceremony with co-host Joe Scarborough, which was officiated by Cummings at the National Archives in Washington DC.

“It’s interesting, over the past couple of days, as Joe and I have been speaking out in support of Elijah Cummings, we’ve heard a lot from Trump supporters and Trump support groups that we didn’t disclose that Elijah married us at the National Archives in Washington last November,” she began.

“You can read about it on our Instagram accounts,” Mika pointed out. “I have a couple posts going with pictures from the wedding, and also asking people to stand with Elijah. We chose Elijah Cummings to marry us because he really represents everything that we aspire to be in a human being. He really is the man of the moment at this moment in history.”

She also noted that Trump himself wanted to perform the nuptials even after he had viciously attacked Mika and Joe over the previous two years, and Mika coolly put Trump in his place.

“Also, for the record, President Trump offered to marry us and we turned down that offer,” Brzezinski said. “That wasn’t going to happen.”

A spurned and humiliated Trump then desperately insisted that he never made such an offer, all while once again referring to Mika as “psycho”.

Just reminded my staff that Morning Joe & Psycho were with me in my room, at their request, the night I won New Hampshire. Likewise, followed me to other states….

….Don’t watch show, but heard Mika said I asked to preside over their marriage. Not true—does anyone really believe that? They were married by Elijah, King of Baltimore!

Unfortunately for Trump, his analysis couldn’t be more false as AM Joe has consistently beat out CNN for 17 straight quarters:

This petty toddler behavior just continues on and on, all while Republicans cowardly sit in silence.