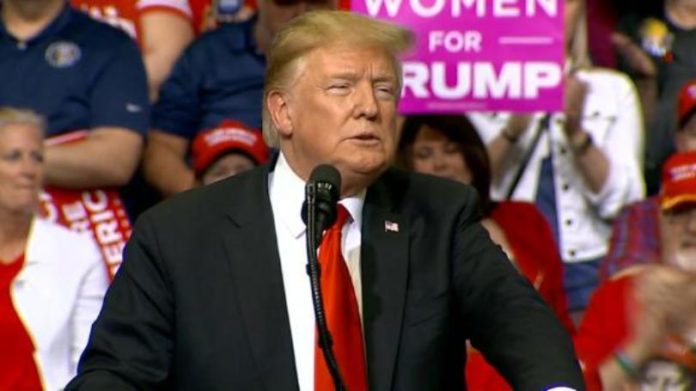 At a rally Saturday evening in Green Bay, Wisconsin, President Donald Trump attacked the FBI and Justice Department, took full credit for a controversial plan to send immigrants to sanctuary cities, and expressed his fawning support for Saudi Arabia.

The rally, held on the same night as the annual White House Correspondents dinner, went on for nearly an hour and a half, with Trump also making childish references to the 2020 Democratic nominees for president.

At one point, the president referred to FBI and Department of Justice officials who had investigated the Russian attack on the 2016 election as “scum,” telling the crowd:

“If you look at what’s happened with the scum that’s leaving the very top of government, people that others used to say, oh, that’s one — these were dirty cops. These were dirty players.

“You take a look at what’s going on, there’s 21 of ‘em already. And I’m not even doing — they’re just leaving because they got caught like nobody ever got caught.”

Wow — Trump refers to the FBI and DOJ leaders he’s purged from government as “scum” pic.twitter.com/mkjiWZ68cp

When he turned to the issue of immigration, Trump proclaimed that he had come up with the idea to ship immigrants to sanctuary cities, and then lied that the plan was being implemented, even though Homeland Security officials have said it was never put in place:

“We’re sending many of them to sanctuary cities, thank you very much. They’re not too happy about it. I’m proud to tell you that was actually my sick idea.”

Trump gleefully admits it was his “sick idea” to use immigrants as pawns in his games of political retribution. Disgusting pic.twitter.com/xQHq3s76xC

On the subject of foreign policy, which Trump has repeatedly proven he doesn’t understand, the president doubled down on his support for Saudi Arabia and Crown Prince Mohammed bin Salman, who is believed to have ordered the brutal murder and dismemberment of Washington Post journalist Jamal Khashoggi:

“They buy a lot from us, $450 billion they bought. You know, you had people wanting to cut off Saudi Arabia. They bought $450 billion. I don’t want to lose them!”

So apparently if you buy enough from the United States, you can murder anyone you want and get away with it. No wonder this country is now the laughingstock of the world.