The United States Blues
Home News Trump Calls The New York Times The ‘Enemy Of The People’ In... 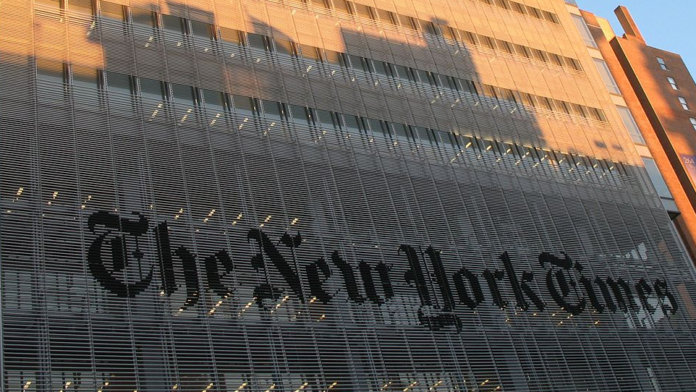 President Donald Trump once again attacked the free press as the “enemy of the people” in a Twitter rant whining about a story in The New York Times reporting that Trump is questioning Vice-President Mike Pence’s loyalty.

The bombshell report, which quotes White House staffers, says that Trump is going around asking for opinions on whether Pence is still loyal to him ahead of the 2020 Election.

Pence’s loyalty has been questioned before, especially after the anonymous New York Times op-ed in which an alleged conservative inside the White House said that a group is working against Trump behind the scenes to stop the worst of his agenda. Pence has since denied being the author, but that hasn’t ended the speculation.

Of course, Trump took issue with this latest New York Times report and claimed nobody sought a quote from him.

“How do you do a story like that, and you don’t call the principal?” Trump said before leaving for California on Saturday. “I would give them a quote, I would say it’s not true. And that’s the end of their story. But they don’t do that. You know what the quote would be? Mike Pence is 100 percent. Now you can’t do your story. So that’s why they don’t like calling me for a quote.”

It should be pointed out that Trump is a serial liar who often refuses to answer questions from the press. He would rather attack them, which he did later in the day on Twitter:

The New York Times did a phony story, as usual, about my relationship with @VP Mike Pence. They made up sources and refused to ask me, the only one that would know, for a quote….

….I can’t imagine any President having a better or closer relationship with their Vice President then the two of us. Just more FAKE NEWS, the Enemy of the People!

But it’s not true that the Times did not seek clarification from Trump or high-level White House officials.

Maggie Haberman, who co-wrote the piece, fact-checked Trump on Twitter by revealing that she emailed White House Press Secretary Sarah Huckabee Sanders for comment and actually did print a comment they received from deputy press secretary Hogan Gidley:

FACT CHECK: Emailed with @PressSec and spoke with first deputy Hogan Gidley, who is quoted. POTUS would need to talk to them about why they didn’t provide us with a quote from him. https://t.co/Z5gE9q8FqF

But even if Trump had been quoted as denying the report, it still would have been published because, again, Trump is a liar and White House staffers often know more about the inner workings of the White House than Trump is willing to reveal because of how chaotic his administration is.

Nonetheless, Trump could have simply denied the story and moved on. Attacking the press as the “enemy of the people” is over the line and wholly unpresidential, the kind of behavior that cost Republicans the House and could cost them the Senate and White House in 2020.