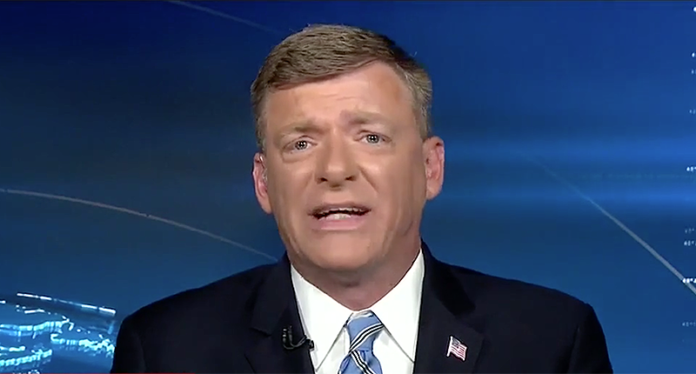 No matter how often you confront those who work for President Donald Trump with indisputable facts, they do the same thing as their boss: Deny, deflect, and resort to lies.

Such was the case on CNN Wednesday morning when Marc Lotter, a senior official with the Trump 2020 campaign, was asked by host Poppy Harlow about why the president’s poll numbers remain so low despite the economy doing well overall. Specifically, Harlow inquired of Lotter:

“A Quinnipiac poll came out yesterday — it showed a whole lot of Democratic presidential candidates beating the president in head-to-head matchups, from Elizabeth Warren to Beto O’Rourke, to Joe Biden to South Bend, Indiana mayor Pete Buttigieg. Are you concerned about that?”

“Absolutely not. Quinnipiac has no record of success here!”

But Harlow was more than ready for that response, and she quickly countered Lotter:

“Marc, Quinnipiac is one of the most reliable polling sources there is. I don’t want to go down this rabbit hole on questioning the veracity of polls.”

That’s when Lotter tried to deny that polls matter in the least this early in the campaign. He also suggested that the size of the crowd at Trump’s re-election kickoff rally in Orlando, Florida, Tuesday was a better indicator of where the president stood.

But if those polls had shown Trump leading his possible Democratic opponents, he and all of his spokespeople would have been trumpeting them during every interview. See, Trump loves polls when they show him winning, but he says they’re fake when they reveal that the majority of voters despise him.

That Quinnipiac poll should be especially troubling for the Trump campaign, as Politico reported Tuesday:

The former vice president leads Trump among Florida voters by 50 percent to 41 percent, according to a Quinnipiac University poll published Tuesday ahead of the president’s campaign kickoff rally at Orlando’s Amway Center.

It is indeed early, and polls can change over time, but the fact that an incumbent president is doing this poorly with a strong economy suggests that people are sick and tired of Donald Trump. If that trend continues, Trump could be toast in 2020.