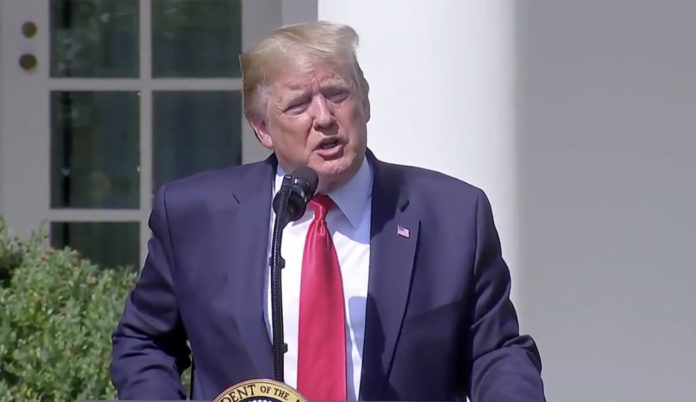 President Donald Trump once again demonstrated that he has absolutely no healthcare plan to compete with the universal healthcare plan offered by Democrats, so he lied as usual and attacked Medicare for All in a nonsensical rant.

Ever since 2016, Trump has claimed that he has a “great” healthcare plan that Americans will love, but despite two years of Republican control of Congress, Trump has failed to deliver all while relentlessly trying to take healthcare away from millions of Americans.

Trump has also been using healthcare to hold Americans hostage, telling reporters that we will get to see his plan ONLY if he is re-elected in 2020.

That should tell you everything you need to know right there. Trump has no plan.

And when asked for details of his healthcare plan by a reporter on Tuesday, Trump answered with nothing but the same old tired response before pivoting to attack Medicare for All with vicious lies.

“On top of everything else, they’re looking at 80, 90, 95 percent tax, because there’s no — there’s no way they can afford it,” he continued. “But people don’t want to go to a hospital, to go to a doctor. They don’t want to go. They want to have their own doctor, number one, and we went through this with Obamacare, which we got rid of the individual mandate, by the way, which is very important.”

“But we have a great health care plan,” he concluded. “If we get the House, we hold the Senate, we keep the presidency, we’re going to have great health care, much better than Obamacare, at much less cost.”

A New Hampshire reporter asked Trump, “What’s the Trump plan for health care coming up?” As he did in the 2016 election, Trump said “we have a great plan coming out” without providing a single detail: pic.twitter.com/qjhaazoxSB

Yeah, Trump is totally talking out of his a**, and is making it even more clear that he has no plan. If his plan is so “great,” one would think he would want to promote the hell out of it and give Americans all the “great” details in order to convince them to vote for him in 2020. But Trump is not doing that. Instead, he is saying nothing while demonizing a Democratic plan that is only gaining in popularity.

Medicare for All would work in the United States about the same as universal healthcare programs work in others. It’s paid for via a simple tax, just like the payroll tax that currently funds Medicare and Social Security. Covered by the government, Americans would get to see any doctor they want. The government would also be able to control prices to make healthcare less expensive, and drastically so. After all, an American in Taiwan only had to pay an $80 bill after going to the emergency room there.

The bottom line is that Democrats have a clear detailed plan going into 2020 while Trump is all talk because the reality is that he has nothing but lies to offer voters. The cost of healthcare in this country is unacceptable and you can bet that Trump has no plan to fix it.