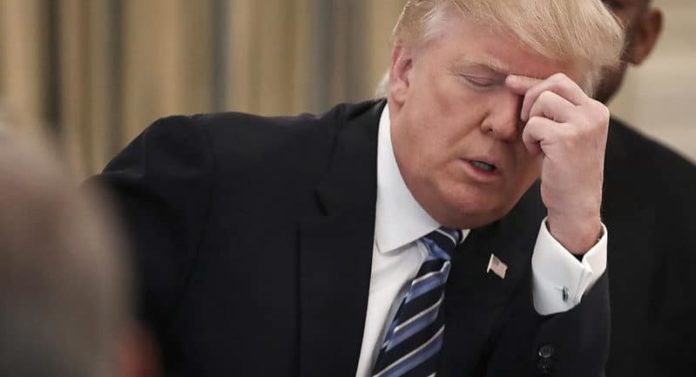 President Donald Trump wasted no time declaring victory in the aftermath of the 2018 midterm election on Wednesday morning, forcing Twitter users to pointedly inform him that Republicans got beat in many areas.

In an early morning tweet, Trump claimed that his administration can get things done now that the election is over and his party has won a “big victory” that foreign nations allegedly congratulated him for:

Received so many Congratulations from so many on our Big Victory last night, including from foreign nations (friends) that were waiting me out, and hoping, on Trade Deals. Now we can all get back to work and get things done!

But, as usual, Trump is lying and delusional.

Yes, Republicans held the Senate but they lost the House to Democrats, who now have the power to investigate him and subpoena his records. House Democrats can also block his legislative agenda. Furthermore, Democrats recaptured the governorship of several states, some of which are crucial to Trump’s chances in 2020, including Wisconsin and Michigan.

It should also be pointed out that many of the Republicans Trump hand-picked lost their races, including Kris Kobach, who suffered a stunning defeat to his Democratic opponent in the Kansas gubernatorial race. Democrats also may have lost key races, but they were competitive and the vote totals were very close, which doesn’t bode well for the GOP.

Overall, the 2018 midterm election is comparable to the 2010 midterm when Republicans took over the House but saw their Senate minority get smaller as Democrats picked up seats. The exact reverse happened this year.

Furthermore, women and minorities came out to vote against Republicans in droves last night, carrying many female and minority Democratic candidates to victory, which should scare Republicans, who went to great lengths to suppress the vote in states such as Texas, Georgia and Florida, where Republicans narrowly avoided losing.

This election was also a victory for LGBT citizens as house seats and Colorado’s governorship were gained by members of that community of Americans.

Twitter users responded to Trump’s declaration of victory with mockery and reality.

Who wants to tell him?

This would be a great time to congratulate the amazing amount of woman, LGBT and people of colour who won elections…. wait silly me nevermind I forgot who I was dealing with here…. divide, divide divide

You got creamed and you know it, chubs. Buckle up. Your tax returns, protecting Mueller, and subpoenas flying around your sweaty ass like doves in a John Woo movie.

congratulations on the orange jumpsuit you’re getting fitted for

This is like the Japanese exclaiming how wonderful the atomic bombs were for them.

Trump lost the House last night and his unbridled power is now checked on many levels.@realDonaldTrump

Speaker of the House – Nancy Pelosi

You asked voters to make this election all about YOU. They did. And you lost. BIGLY. You cost the #GOP the House. So many critical seats. And governorships. Voters gave you a “D” on your report card. I’d be so humiliated if I were you… #Trump #2018Midterms

Lols! What results were you watching? Time to show those tax returns. Time for all the oversight committees to get to work. Time to pay the piper!

Clearly, Trump took a major hit on Tuesday night. Republicans kept the Senate, but Trump’s power just got checked by a major Democratic win for control of the House of Representatives. That’s the big victory here. And Democrats could very well carry that momentum into 2020.