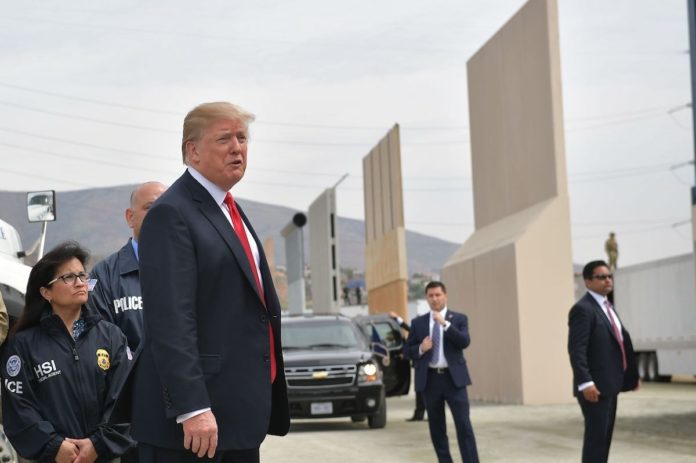 President Donald Trump decided to do two of his favorite things Monday afternoon: Tweet out false information and declare that the Constitution isn’t important as it applies to things he wants to do, such as the border wall:

Republican Senators have a very easy vote this week. It is about Border Security and the Wall (stopping Crime, Drugs etc.), not Constitutionality and Precedent. It is an 80% positive issue. The Dems are 100% United, as usual, on a 20% issue, Open Borders and Crime. Get tough R’s!

First, a fact-check is needed on the 80 percent claim, because it’s patently false.

A recent Gallup poll showed that 60 percent of those surveyed said they oppose new construction on a border wall.

When it comes to Trump’s national emergency declaration, a Politico poll taken in late February made it clear that Americans don’t support that either:

Trump’s remark about the wall not being about “Constitutionality and Precedent” was also met with reminders that despite his deepest wishes of being emperor, we don’t have Caesars in this republic:

So the Constitution doesn’t matter? The Supreme Court disagrees.

Look mom I made up numbers.

I’m 100% positive that 80% of your body is just stuck together by fried chicken grease.

Did the president of the United States just say he doesn’t care about the legality of his actions?

No Mr President it is about Constitutionality the fact that cause you didn’t get what you wanted you are trying to skip the constitution. Maybe you need reminded you are one of three equal branches of government not a dictator.

It’s called separation of powers. I’d ask you to look it up but I know better.

Those who would give up essential Liberty to purchase a little temporary Safety, deserve neither Liberty nor Safety.

Just a reminder – You and every Senator took an oath to defend the Constitution, which means that every vote and every action you and they take while in office is, by definition, about constitutionality.