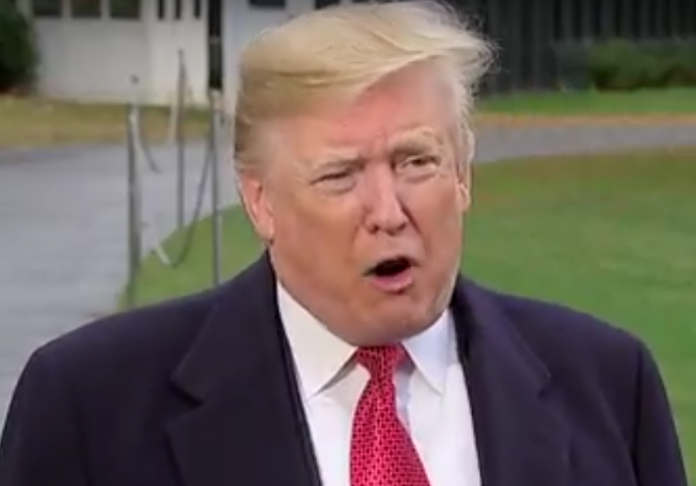 President Donald Trump’s illegal appointment of Matthew Whitaker as Acting Attorney General took an even more concerning turn on Friday morning when he claimed to not even know him.

Trump handed Whitaker the job earlier this week after asking Attorney General Jeff Sessions to resign despite the fact that Whitaker was only Sessions’ chief of staff and had not been confirmed by the Senate.

Now Whitaker not only oversees the entire Justice Department, but he also oversees the Russia investigation conducted by Special Counsel Robert Mueller, seizing the supervisory role from Deputy Attorney General Rod Rosenstein, who is the rightful person to take over for Sessions in an acting capacity until Trump nominates and the Senate confirms someone.

The unconstitutionality of Trump’s action notwithstanding, Trump made things worse by actually claiming that he doesn’t even know Whitaker while speaking to reporters outside the White House.

Let’s get this straight. Trump is literally claiming that he doesn’t even know the man he placed in charge of the Justice Department?

What president would appoint a person to a high-level Cabinet position without at least meeting with him first?

This is irresponsibility on a whole new swampy level.

According to The New York Times, Trump and Whitaker did know each other. In fact, they said, “He has frequently visited the Oval Office and is said to have an easy chemistry with Mr. Trump.” In addition to that, they also mentioned that Mr. Trump was considering promoting him to be The White House counsel, to replace Don McGahn, who retired from the position.

But that’s not all. Despite allegedly not knowing Whitaker, Trump complained that it’s unfair for people to attack him.

“Anyone that works for me, they do a number on,” Trump whined. “The choice was treated with raves initially. It’s a shame, that no matter who I put in, they go after them.”

Trump also claimed that he never spoke to Whitaker about Mueller and the Russia investigation, even though it’s clear that judging from Whitaker’s criticisms of the probe that Trump appears to have appointed him because of his bias against it.

But reporters soon called out Trump for lying about not knowing his new Acting Attorney General, pointing out that Whitaker has been present at meetings with Trump in the Oval Office and that one of the main reasons why Trump picked him is because of his hostility towards the Russia probe.

Trump, contra what he’s saying right now, does know Whitaker. Many meetings in Oval. One reason he picked him was because he liked him so much, per several Trump aides. (And saw him as skeptical of Mueller probe.)

This is an alarming situation. Either Trump really does not know the man he put in charge of one of the largest and most crucial government agencies or he is flatly lying about it. Could this perhaps fit the pattern of Trump distancing himself from people he knows are “going down” legally or politically. People like Carter Page (the “coffee boy”), General Flynn (after he pled guilty, Trump tried to pawn him off as an “Obama appointee’) and Paul Manafort — who Trump claimed to barely know despite evidence to the contrary (like Manafort living in Trump Tower for years).

Either way, Americans should be outraged and so should Congress.