The United States Blues
Home Elections Trump claims he will release a ‘financial statement’ prior to the 2020... 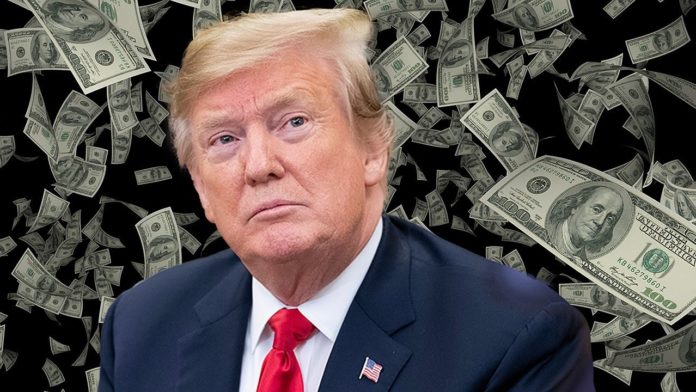 Despite the fact that he is begging the Supreme Court to block release of his income tax returns, President Donald Trump said Thursday that he plans to let the public see a “financial statement” prior to the 2020 election:

Bob Mueller, after spending two years and 45 million dollars, went over all of my financials, & my taxes, and found nothing. Now the Witch Hunt continues with local New York Democrat prosecutors going over every financial deal I have ever done. This has never happened to a…..

…..President before. What they are doing is not legal. But I’m clean, and when I release my financial statement (my decision) sometime prior to Election, it will only show one thing – that I am much richer than people even thought – And that is a good thing. Jobs, Jobs, Jobs!

Of course, we’ve been down this road before, Mediaite notes:

The president has previously claimed that he will release financial records but has never followed through. During the 2016 election, Trump promised to release his tax returns as soon as he is not being audited, but in the spring of 2017, the president changed his tune to say that he “might” disclose his returns in the future, but only after he leaves office.

Twitter users were eager to remind the president that he isn’t exactly the most reliable person, especially when it comes to matters of money and finance:

If you’re “Clean”, why run to the Supreme Court for protection. Clean people come clean.

Another day another lie, Mnuchin rejected house ways and means committee chairman second request for trumps related tax returns and the Trump legal team filed suit prevent or delay the release of his financial statements. Mueller did not follow the money. Stop lying.#ResignNow

You have to be the most miserable person on earth. The richest people are mostly those who believe that other things like love for one another, little things that money can’t buy makes one rich. Show your taxes. Let the people see the proof. #Impeach