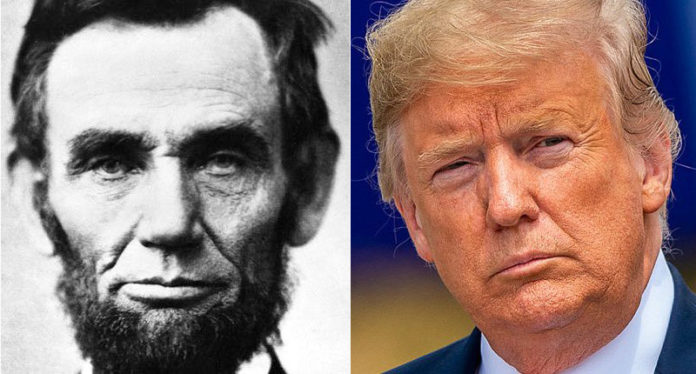 President Donald Trump poured on the narcissism and delusions on Twitter Saturday morning by calling himself “everyone’s favorite president” and comparing himself to Abraham Lincoln.

Trump woke up and parked himself in front of the television during his “executive time” and apparently saw disgraced former House Speaker Newt Gingrich running his mouth about how Trump is supposedly “treated worse or more unfairly” than Lincoln. Trump then claimed to be America’s “favorite president” and and declared that he’ done more in two years than any other administration:

Let’s just point out the obvious. Lincoln was assassinated. There’s no worse treatment than that. He was also humble, the complete opposite of Trump, and was known for being honest while trump has told over 7,000 lies since taking office. As for being America’s “favorite,” 44 percent of Americans identified former President Barack Obama as the best president of their lifetimes, while only less than half that number said the same about Trump. Also, a recent poll shows most registered voters definitely will NOT vote for Trump in 2020.

As for accomplishments, Trump has played more golf, gone on more vacations, and now owns the longest government shutdown of any president. The government even continued to run during the Civil War when Lincoln was in office. Trump’s legislative accomplishments are few and what he has managed to sign has amounted to laws that most Americans don’t like or are trivial such as renaming post offices.

Twitter responded to Trump by taking him to the woodshed:

Oh good God. Just when I thought you couldn’t get any more pathetic!!

Whining and self-pity are two traits that will never be attributed to Lincoln. You’re an embarrassment to the office of President of the United States of America.

Was Lincoln a Russian agent?

Lincoln would turn in his grave to see the likes of you in office. But, he was a good guy. Maybe he’d invite you to a show.

You have same type of base that killed Lincoln

Lincoln banned slavery because it’s wrong. @realDonaldTrump is forcing people to work without pay to force taxpayers to pay for a racist monolith.

Really? You’ve done a great job at dividing the country and encouraging racism. Like no President ever. You’ve taken credit for things you didn’t have anything to do with like no other President. Don’t compare yourself to Lincoln. You exacerbate bigotry. No comparison.

Lincoln was treated unfairly for abolishing slavery. You are treated fairly for attempting to abolish democracy

Trump supporters are going to eat this up because they are lapdogs, but most Americans will see right through Trump’s delusions of grandeur and see him for the insane moron that he is.