The United States Blues
Home Business Trump claims ‘the coal industry is back,’ but two of the largest... 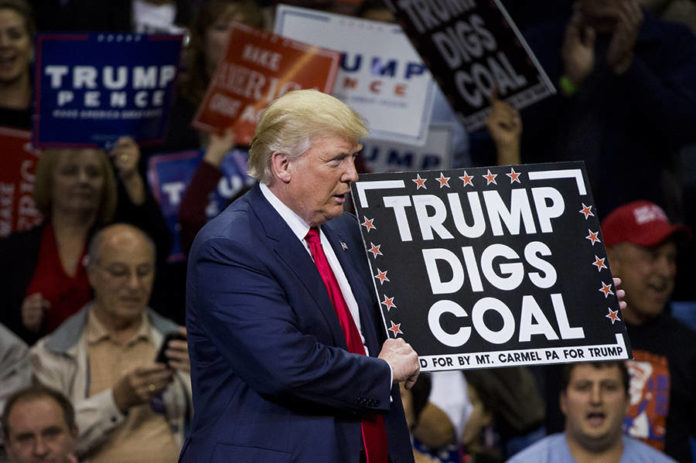 When he was in Charleston, West Virginia, late last year, President Donald Trump proudly announced that he was putting coal miners back to work, remarking:

“We are back. The coal industry is back.”

But as the Associated Press notes, if the coal industry is back, that’s certainly not the way it feels in Montana and Wyoming, where two of the biggest coal mines in the country have just filed for bankruptcy and closed:

“Blackjewel furloughed most of its Wyoming employees and shut down Eagle Butte and Belle Ayr mines, the first idled by hardship since coal mining in the Powder River Basin exploded in the 1970s.

“It’s a big hit to the region straddling northeastern Wyoming and southeastern Montana, where coal has quietly supported the economies of both states for decades and fuels a shrinking number of power plants in 28 states.”

As a result, some 600 workers have lost their jobs, and a plan to sell the mines to another owner have fallen apart, leaving many to suspect that the coal industry is indeed in its death throes:

“With coal in long-term decline, how the basin might eventually scale down production to a sustainable level has become a big question, said Rob Godby, director of the Center for Energy Economics and Public Policy at the University of Wyoming.

“’The irony here — and it’s really a cruel irony — is everybody is focused on getting these miners back to work. But really the solution to creating a healthy industry is some mines close,’ Godby said.”

2019 has been a year of bad news in this region of the country, which has long relied on the coal for its financial livelihood:

“Three of the Powder River Basin’s nine producers — Westmoreland Coal, Cloud Peak Energy and Blackjewel — have filed for bankruptcy since March. Two others, Arch Coal and Peabody, have announced they will merge assets in the region.

“The turmoil comes as U.S. coal production is down over 30% since peaking in 2008. Utilities are retiring aging coal-fired power plants and switching to solar, wind and cheaper and cleaner-burning natural gas to generate electricity despite President Donald Trump’s efforts to prop up the coal industry.”

Even the promise of exports to Asia don’t seem to be panning out, mainly because there’s no direct railroad line to the Pacific Northwest for most of the mines in the basin, and the amount of coal that would be exported simply isn’t enough to offset the other financial problems the industry faces.

The coal industry is not “back,” as Trump maintains. It’s  fading fast, and all the promises in the world can’t change that.