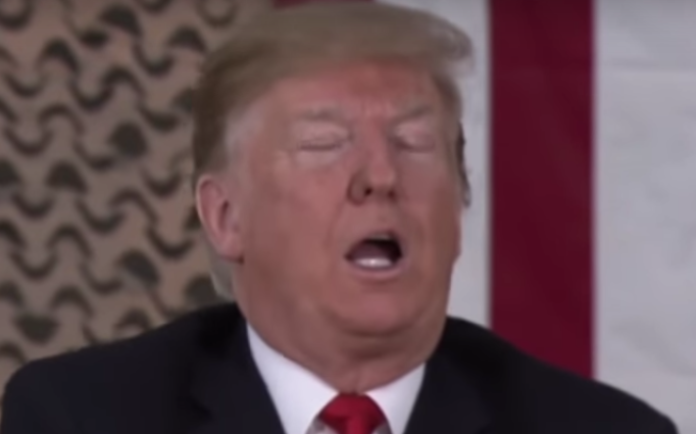 President Donald Trump traveled to Iraq late Tuesday night to visit with American troops who have served in a combat zone for the last 15 years, only to complain about his bumpy plane ride on Air Force One.

The surprise visit came nearly two years after Trump took office, during which time he has faced stiff and well-deserved criticism for refusing to visit troops in a war zone, often claiming that he is “too busy” even though he has a tone of time to watch television, rant on Twitter and play round after round of golf.

Trump is also clearly a coward who fears being attacked by the enemy. After all, he didn’t dodge the draft during the Vietnam War five times just to be killed or wounded overseas by an enemy combatant 50 years later.

However, it would be understandable for anyone to be concerned or nervous about traveling to a war zone in Iraq.

But Trump had the gall to claim that he wasn’t concerned, telling reporters that he feared for the “institution of the presidency” and First Lady Melania Trump instead of his own safety, which we all know is bullsh*t because Trump is a selfish narcissist who doesn’t care about anyone but himself.

Anyway, Trump also made it sound as if he went through something horrific.

“When I heard what ya had to go through,” he began. “I mean look, I had concerns for the institution of the presidency, because, not for myself personally, I had concerns for the First Lady, I will tell you. But if you would have seen what we had to go through, with the darkened plane with all windows closed, with no lights on whatsoever, anywhere, pitch black, I’ve never seen that, been on many airplanes, all types and shapes and sizes, I’ve never seen anything like it. We’re coming in and I know all of the things that were surrounding us for safety. So did I have a concern? Yeah, I had a concern. But my bigger concern was maybe the people that were with me. Certainly all of them.”

According to The Drive’s Tyler Rogoway, who specializes in military and aeronautical technology and strategy:

It should be pointed out that both former Presidents George W. Bush and Barack Obama repeatedly had the same experiences, but they didn’t whine about it like Trump did, especially in the presence of troops who literally risk their lives every day in Iraq and elsewhere doing what Trump cowardly refused to do during the Vietnam War, which is to fight for our country and freedoms.

Air Force One is also the most comfortable and most equipped aircraft on the planet, and most certainly the safest with the best and most experienced pilots the United States Air Force has to offer. Seriously, complaining about such a plane ride is ridiculous and insulting compared to what our men and women in uniform go through every day in war zones.

Next time, Trump should simply lie like he always does and just say that it was a great flight.